Price Realized: $ 5,600
Price Realized: $ 6,720
?Final Price Realized includes Buyer’s Premium added to Hammer Price
Estimate: $ 5,000 - $ 7,000
RESPONDS TO A REQUEST TO LECTURE (SLAVERY AND ABOLITION.) DOUGLASS, FREDERICK. Two Autograph Letters Signed in a collection of 13 Autograph Letters Signed, the replies to an invitation to lecture by minister Frederick A. Chase of Homer, New York. All the letters, some in their original envelopes, are enclosed in a larger envelope with "Lecture Association Correspondence," and the names of the people invited to speak on the front; included is a large cabinet card photograph of Frederick Chase. 4to's one page each with original addressed envelopes. should be seen. Rochester, and VP, 1855

In addition to the two Douglass letters, there are eleven other letters in reply to Frederick Chase's invitation: Horace Mann (3), E. H. Chapin (1), Bayard Taylor (2), Horace Greeley (1), Thomas K. Beecher (Harriet Beecher Stowe's brother) [2], John G. Saxe (1), and Charles Sumner(1). A rare glance at a mid-nineteenth century "lecture association." In Douglass's first letter (undated, but probably late October, 1855) he writes: "Your note, inviting me to deliver one of your series of lectures in Homer has just reached me in Boston where I now am." He regrets the timing is bad for a December 15th lecture, and says he will probably not be available until the first week of February (1856). "At that time I shall be happy to come--if you shall then require my services." In the second letter, (Rochester, Nov. 8, 1855) Douglass writes: "My Dear Sir: My appointments for Jan. are for the most part conditional and subject to the call of Literary Societies in New England. While however, I cannot now fix for any appointments in New York during that month, I think you may depend upon me for a lecture in Homer sometime during the month of Jan. should your Association continue to desire it. In the course of next month I shall probably be able to give you a positive answer."
The remaining letters are sometimes brief, "boiler plate" replies as in the case of Charles Sumner, who declines because of scheduling. Others are lengthy, like that of Bayard Taylor, the travel writer who not only offers a choice of different topics, but includes his fee schedule as well. Or the three letters from Horace Mann, who writes from Antioch College (and from Hartford) discussing possible topics, manner of payment based on a percentage of the evening's proceeds, etc. Non-conformist minister Thomas K. Beecher offers a choice of a humor talk called "Play," or something more serious, titled "Democracy." Taken separately, none of these letters is of any great moment. However, when viewed as a group, they present a fine snapshot of the mid-nineteenth century lecture circuit. These are the turbulent years of "Bleeding Kansas," and the slave versus free state argument that would eventually lead to Civil War. Frederick Augustus Chase (1833-1909) was a Presbyterian minister and reformer, later professor of natural science at Fisk University. 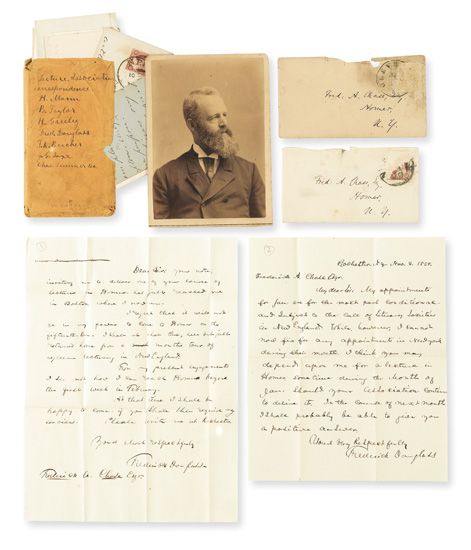