Unsold
Estimate: $ 25,000 - $ 35,000
BOUND BY DOUGLASS AT THE NORTH STAR OFFICES DOUGLASS, FREDERICK. Narrative of the Life of Frederick Douglass, an American Slave, Written by Himself. Lacking the frontispiece portrait of Douglass, as do all other copies examined. xii, [xiii]-xvi, [1]-125 pages. Demi-8vo, original roan-backed printed paper-covered boards; some discoloration and a few abrasions to the front board tips; considerable foxing throughout; early ownership in pencil of "John H. Jones, 1848" and a few repetitions. Boston: at the Anti-Slavery Office, 1847-Rochester: Published at the North Star Office, 1848

of the greatest rarity. one of only five known copies, one of which is defective. When Frederick Douglass's Narrative first appeared in 1845, he had already been lecturing for over four years as the shining star of the New England abolitionists, William Lloyd Garrison, Wendell Phillips et al. Douglass's Narrative was an instant best-seller, going through 5000 copies of the first printing in four months. [There were, in all six more printings between 1845 and 1849.] It was the success of the Narrative that alerted Douglass's owner Hugh Auld as to where his slave could be found. As a result Douglass was forced to leave the country and in the fall of 1845 set sail for Cork, Ireland to begin a two year lecture tour of Great Britain.
Upon his return, Douglass continued to lecture and contribute articles to various anti-slavery journals, including Garrison's Liberator. However there were grumblings about how much he should be paid per article. After hearing that Douglass felt his writing was worth $2.50 per article, Edmund Quincy, then current editor of the Liberator wrote to Caroline Weston [Maria Chapman's sister], "Talking of unconscionable niggers, I wrote to Douglass to ask him what he should consider a fair compensation for the letters [articles] that he proposed he sh'd write for the Standard [The Anti-Slavery Standard]. In due time I rec'd and answer saying he should think two dollars and a half about right. I consulted Wendell [Phillips] about it & he thought we had better not beat him down; but tell him that $1.00 was as much as we could afford." (McFeely, page 147). Quincy had been complaining too about Charles Lenox Remond and William Wells Brown. But Quincy was not alone in his love/hate for the African-American. It was clear to Douglass, as it was to Remond and Brown, that there were a great many white abolitionists who placed their own position as the standard-bearers of social justice ahead of the interests of the African-American.
In the fall of 1847, Douglass, encouraged by Amy Post and Gerritt Smith, had already made up his mind to move to upstate New York and publish his own newspaper, to be called the "North Star." The evidence is clear that before leaving Boston, Douglass took with him an unknown number of copies of the sheets for the Boston Anti-Slavery Society's 1847 printing of his Narrative. Once established in Rochester, he had them bound up as they are here, with the North Star imprint. I have personally examined four copies of this binding of the Narrative, none include the portrait frontispiece of Douglass, nor is there any sign that it ever was bound in. This can be explained by the fact that engravings for 19th-century books were most often produced at a totally different place than the printed text. We were able to locate five copies: two in private collections, one in a recent dealer's catalogue (defective), one located at New-York Historical Society and the present copy. 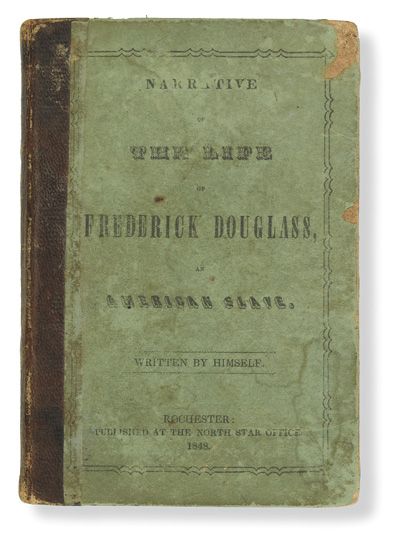