John W. Chrisp (1828-1863) was a slave dealer in Memphis, TN from at least 1859 to 1861. This card advertises his partnership with Robert Monroe Balch (1826-1872) as "Dealers in Slaves" at 89 Adams Street: "They receive and sell on commission, and buy and sell on their own account." Most intriguingly, the card describes this firm as "successors to Forest & Jones"--the infamous Nathan Bedford Forrest.
The slave dealers of Memphis operated in a dizzying succession of partnerships in the 1850s. The most successful was Nathan Bedford Forrest (1821-1877), who later gained national fame as a Confederate cavalry general, perpetrator of the Fort Pillow Massacre, and founder of the Ku Klux Klan. Forrest was thought to be making as much as $96,000 per year in profit at the peak of his slave trading in the late 1850s. Forrest's first slave-trading firm was Forrest & Jones, established in 1852. It dissolved after a year, with Forrest then joining forces with Byrd Hill as Hill & Forrest. Forrest & Jones seems to have re-formed by 1856; an escaped slave ad asserted that the escapee was recently purchased from the firm in the Memphis Appeal, 20 January 1857. On 29 September 1859, the new firm Hill, Ware & Chrisp announced the acquisition of Forrest's "commodious and well arranged Negro Mart building" at 87 Adams Street (Memphis Appeal; see also a card in Swann's 27 March 2014 sale, lot 69). However, in January 1861, we see Forrest, Jones & Co. in partnership yet again on Adams Street, when their new "Negro Mart" building collapsed and killed two unfortunate enslaved men (Memphis Appeal, 14 January 1861). This appears to be the business which was taken over by the new Chrisp partnership advertised on this card, John W. Chrisp & Co. We find only one other direct mention of this Chrisp & Co. partnership, when they filed a lawsuit in May 1861 (see Memphis Appeal, 11 September 1861). Chrisp and Forrest were certainly acquainted, beyond their mutual interest in running slave markets. They had served together on the finance committee of the local Breckinridge Democratic Association in the 1860 presidential election (Memphis Avalanche, 8 August 1860). See also Hurst, "Nathan Bedford Forrest: A Biography," pages 36 and 56-9. We don't know for certain what became of Chrisp; he was taken in drunk on the streets of St. Louis in early 1863 after being swindled by gamblers (Memphis Appeal, 12 January 1863), and one genealogical site states that he died later that year. A legal notice filed by his late partner Balch suggests that Chrisp was dead by 1865 (Memphis Argus, 6 May 1865). His slave-trading partner Robert Monroe Balch, a Confederate colonel, died 7 years later, shot by a sheriff for refusing to vacate a property.
This card's connection to the dismal business of slave trading is made even more powerful by the direct mention of the trade's most well-known practitioner, Nathan Bedford Forrest, just on the eve of the Civil War. 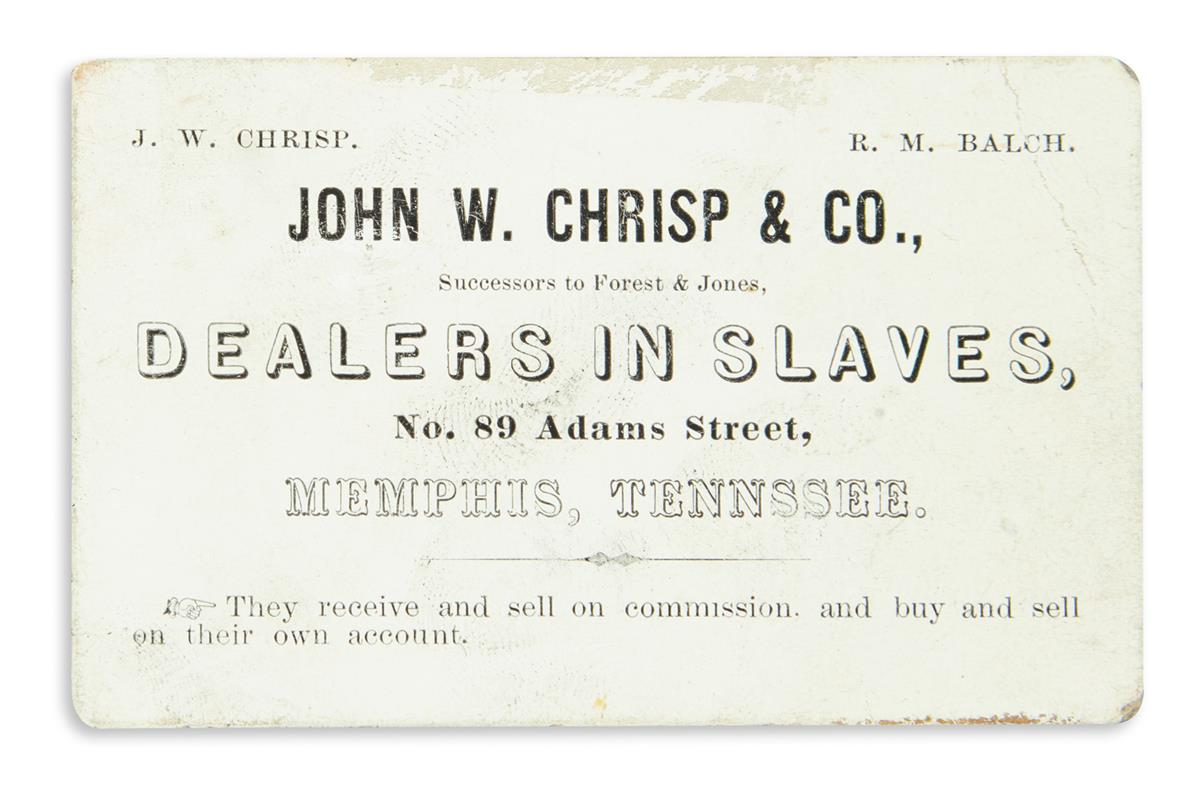