Any letters by enslaved people are scarce, and those few that exist are often written to their master. This poignant letter was written from a young man to his mother, seven years after he had been sold further south from North Carolina to Georgia. It's remarkable enough that both mother and son had acquired enough education to carry on a correspondence; Walker's spelling and penmanship are probably somewhat above the average for a typical white man of the period. The content is even more remarkable. Mixed in with the family pleasantries, Moses is attempting to negotiate the sale of his own brother. He has actively encouraged both his former and his present masters to sell his brother Henry down south, and paints a rather positive picture of life on his current plantation, perhaps to ease Henry's anxiety over being sold. From doing side work, Moses has managed to set some money aside and offers to set his brother up with $30 in savings. In conclusion, he tells his mother that he is married, and that her new grandson has since died.
"Jack and myself is doing well. We are both well. We are clearing in the new ground. We have been clearing for the last three weeks. I keep up with any of the men, and one thing I can't be beaten cutting small grain. We have had a bad crop year. My master allows his servants to make crops for our selves. I made two hundred and sixty pounds of cotton and the reason that I don't sell it is that I am wating to get 30 dollars for it. . . . You say that Henry is to be sold, and my Master says that if he is as healthy as I was when I came away from there, he will give eight hundred dollars for him, delivered at Hootenville, Upson County, Georgia. Tell Master Green Saterfield if he is to be sold, to receive him and return him to my Master. . . . Tell Henry he must leave his family and come. I will give him thirty dollars to start on if he will come, and a good wife, a good home and a good master to live with. I have been living with him nearly seven year and myself and Fanny never has had a lick since we have been here. Mammy, you must have this letter read to all of my kinfolks you write, whether all of you is to be sold or not. Tell Henry that this is a great place for black people. If you and all your family was here I would not care for North Carolina. Tell Master Green to send me word how all his family is. Tell Henry there is some of the pretyest yellow girls out here he ever saw. They are a great deal prettyer than Ann Diggins ever was. . . . Jack sends howdy to all of you and to his Daddy--tell him he is sorter lazy. Tell Sharlott we have not heard from Anna since we parted. She went on with the speculators. Tell Uncle Manuel howdy for me. Tell him I have got a likely yellow wife. I have had one big boy by her, but he is dead. I will close by sending my love to you all, your son Moses Walker."
Some of the people in this letter can be traced in the historical record. Tax records show that the letter writer Moses Walker remained in Hootenville after abolition, farming a 700-acre tract as a tenant in 1877--his industry seems to have paid off somewhat in freedom. He may have married Milly Walker in 1867. They were both listed as former slaves of Nathaniel Freeman Walker (1787-1879) of Hootenville, one of the largest slave owners in Upson County, who is listed in the 1860 census as owner of almost 200 slaves. We have not traced the name of Moses's mother, but the letter suggests that she was owned by Green D. Satterfield (1807-1880) of Person County, North Carolina. In the 1850 census, Satterfield was listed as owner of 15 slaves, including a 45-year-old woman who may have been Moses Walker's mother. 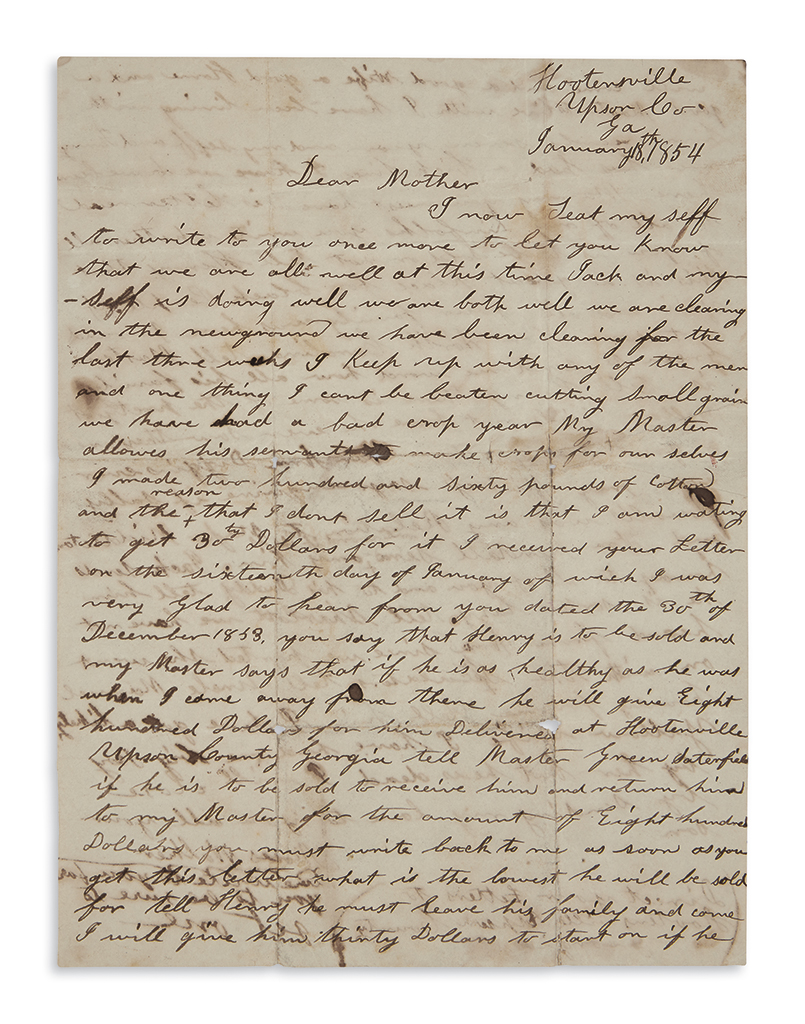