Tilden Dawson was a private in the 1st United States Volunteer Cavalry, known to history as the Rough Riders. He was raised in Vinita, Oklahoma and Nevada, Missouri. The day after the Rough Riders landed in Cuba, they were thrown into combat at the Battle of Las Guasimas. The Americans forced a Spanish retreat, at the cost of the lives of seven soldiers, including Private Dawson. By some accounts, he was the first American to die in the war. The Battle of San Juan Hill would follow six days later.
The highlight of this collection is a typed condolence letter to the soldier's father Andrew Jackson Dawson of Vinita, Oklahoma, signed by Colonel Roosevelt "in camp near Santiago de Cuba," 31 July 1898. Roosevelt writes in full: "I wish I could give you more definite assurances about the body of your gallant son, who was killed in our first fight, but I do not know whether the Government will send him back or not. I have no power to do it myself, glad though I would be to send back everyone of the gallant men who now lie dead on the Cuban battlefields. At present they all lie in the graves we dug for them. Your son's grave is marked and a record kept of it, and if the Government should ever wish to send him back we will be able to identify it at once. Pray accept my deepest sympathy, and yet though I sympathize with you I must congratulate you upon having a boy who did so well and who died a hero's death. Yours very truly, T. Roosevelt, Colonel." Letters signed by Roosevelt during his two months in Cuba appear infrequently; we are aware of none at auction since one brought $22,000 in 1999.
Another poignant item is an undated letter from the renowned war correspondent Richard Harding Davis to Mr. Dawson: "Your boy was shot almost among the first. . . . He looked so young and handsome that I was more sorry for him almost than for all of the others. I gave his Testament to his bunkie whose name I do not know. . . . If you write to Col. Roosevelt, Oyster Bay, Long Island, he may tell you more." Included with this collection are approximately 50 newspaper clippings, some of them quoting Davis about Tilden Dawson and the Testament.
The New Testament itself is also included, a battered and dampstained 12mo volume in red cloth, with Tilden Dawson's name inscribed on the rear free endpaper.
Other comrades who wrote to express condolences include Lieutenant Richard C. Day ("I passed up and down the line several times. Your son was always in his place"), 10 July 1898; and John Byrne, who buried him, Santiago, 6 January 1900. Also included are Private Dawson's hymn book A stereoview of the Rough Riders in review at Montauk, NY Two trimmed real-photo postcards of Private Dawson in civilian clothes Two printed veterans' tributes from Vinita, Oklahoma 8 other letters and documents relating to Private Dawson, 1898-1900 and 3 relating to Andrew J. Dawson's claim for Cherokee citizenship, 1885-96. A truly special Rough Rider archive from one of the regiment's more notable members. 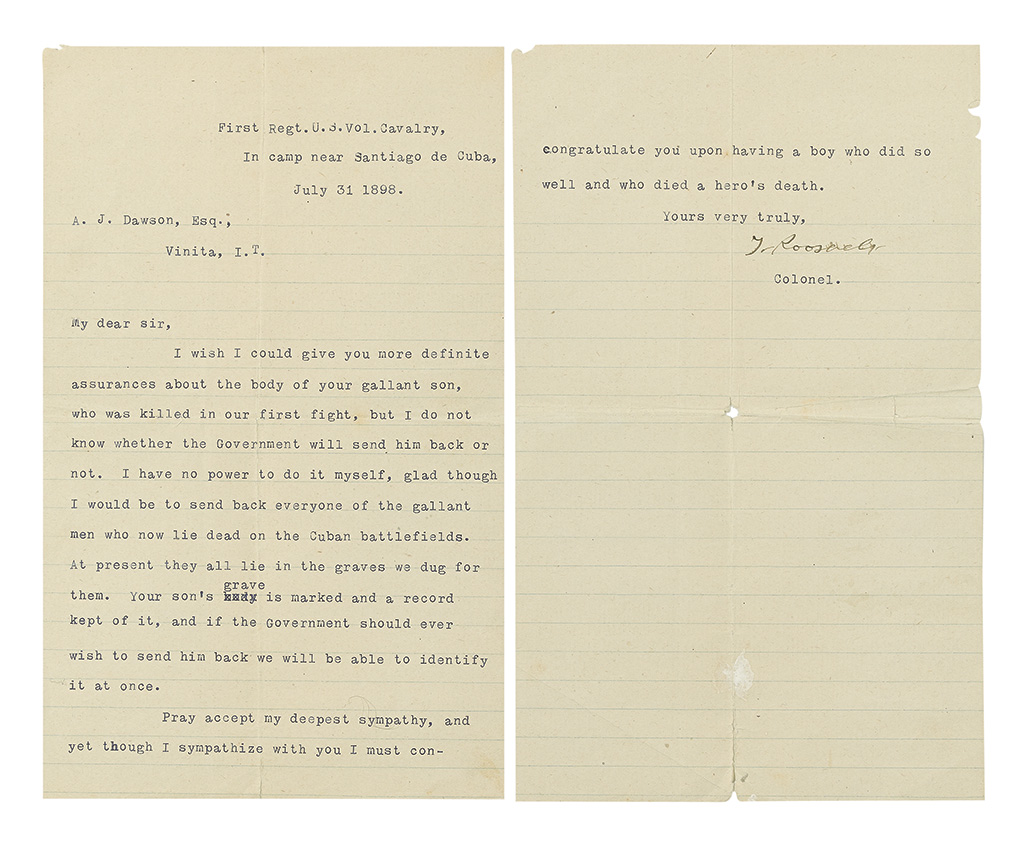