Lewis Cresse (1720-1769) of Cape May, NJ was a farmer who went on month-long whaling voyages in the early part of almost every year. This slim volume, which he titled "Memorandum of Some Remarkable Things," includes his short retrospective accounts of twelve of these voyages, as well as other important events in his life.
The most remarkable aspect of this journal is how few whales Cresse and his colleagues actually landed. After his 1752 trip, he noted: "We kild a stunt whale and next day we got her on shore and kild a yearlin whale and toes her on shore at Briginteen Beach." He went out again in 1753 without success. Nor were any whales landed in 1754, or 1755, or 1756, or 1757, or 1758, or 1759, or 1760. Whaling was difficult and dangerous work; Cresse witnessed at least two fatal wrecks of other ships while he was at sea, but he kept returning in hopes of a big payoff. He records no whaling in 1761, 1762, or 1763, but he went out again in 1764 for his most perilous voyage: "One cross under the stern of our boate with her flooks, which causd us to go a stearn and then we gave her chese which was very crooked and crost. She turnd several times under the bote. At length we came forward that Jacob Hand, harponeer, thought the chance might do. He sot his iron and we attempted to go a starn but she struck the boate with an unusal swiftness and it was unknown how many peaceis she was broke in, but our mates . . . told us that it appeard like a whirlwind a raising a parsel of oake leaves and it was thought she was broke in five hundred peaces." Miraculously, the men on the boat all survived. Stranger still was their decision to immediately return to sea: "We broke off but whales being plenty some of the company was very lively to try another chance and they went to Egg Harber for Capt Stilwill's bote & we made up a company and went again. . . . we soon struck one and killd her and she sank and on the eleventh day in the morning she was ashore west of the Dry Inlet. She fild twenty three barrals of ioyl."
Some of the non-whaling entries are also interesting. On 29 November 1753, Cresse notes: "Died, Cato a nagro man in prison with the hurt of the irons he wore & by cold and long imprisonment." On 15 August 1757 he offers a long account of 19 local men drafted from his town for military service, who returned without incident twelve days later. On 7 January 1764 he visits an elderly widow named Mary Norton and describes her humble circumstances in great length. Following the diary are 3 pages of Cresse births, marriages, and deaths though 1807; 4 pages of local marriages and deaths dated 1752-66; and 6 pages of miscellaneous account and legal memoranda dated 1757-62.
Provenance: by descent over six generations to Genevieve Gelston Haig (1898-1989), who found it stored in "an old family safe . . . practically buried in sand" among the pilings under her family's Ocean City, NJ home. She had it published as "The Whaler's Diary" in the Cape May County Magazine of History and Genealogy, June 1968, page 283. It is consigned by a descendant, the great-great-great-great-great-great-grandchild of Lewis Cresse. 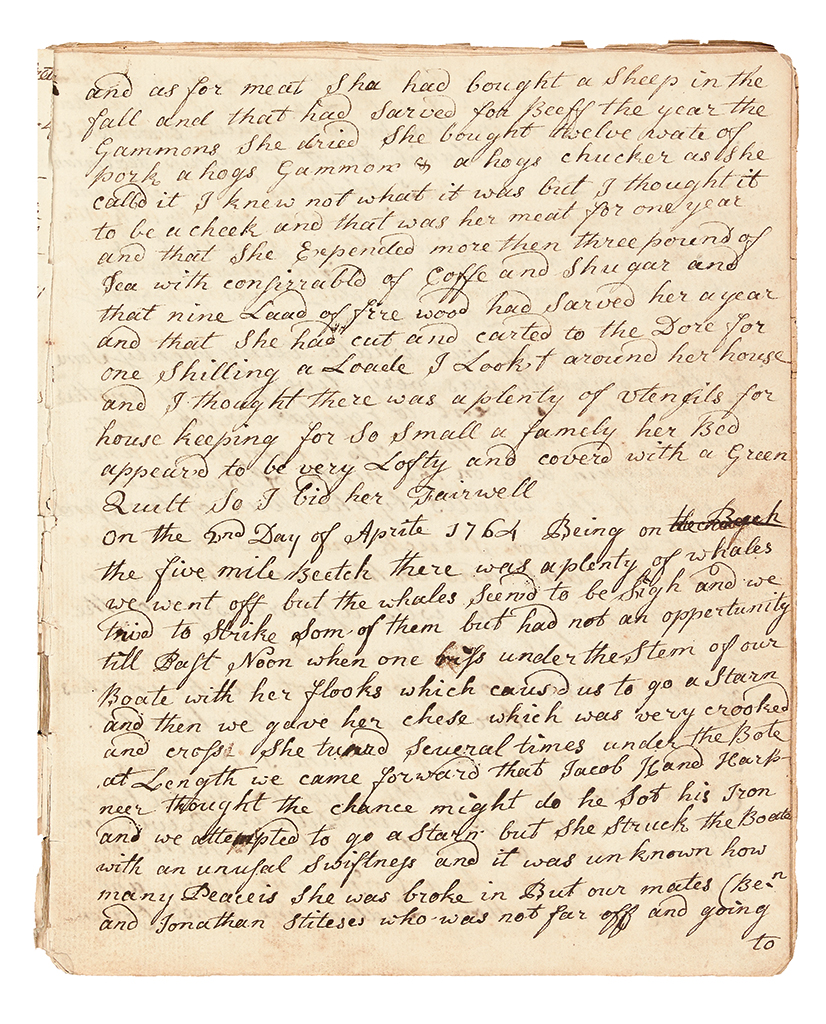