Price Realized: $ 3,200
Price Realized: $ 4,000
?Final Price Realized includes Buyer’s Premium added to Hammer Price
Estimate: $ 1,200 - $ 1,800
"PNEUMONIA AND INFLUENZA ARE TO BE MY PROBLEMS" (WORLD WAR ONE.) Long run of letters home by Dr. Harlow Brooks, Chief Consultant in Medicine to the First and Second Armies in France. More than 160 items (0.5 linear feet): 118 Letters Signed (some autograph, some typed) to his wife Louise and daughter Ruth Walker Brooks, 34 other war-date letters from various correspondents, 9 other personal items, plus printed ephemera; condition of the letters generally strong, many of them still folded in original postmarked envelopes (the envelopes being mostly quite worn). With metal container bearing the doctor's name. Vp, 1917-19 and 1936
Set Alert for Similar Items

Henry Harlow Brooks (1871-1936) was a distinguished Manhattan physician and professor of clinical medicine at New York University. He had served as a civilian physician during the Spanish-American War, and had long been a member of the National Guard, so he naturally volunteered for military service in 1917 not long after the declaration of war on Germany.

At the heart of this collection are 118 letters written to his wife and daughter during his war service. They start with 21 letters written from the Long Island training camp at Camp Upton, best known as the subject of the Irving Berlin musical "Yip Yip Yaphank." At the end of August 1918, Dr. Brooks shipped overseas to France as part of the American Expeditionary Force, where he was soon named Chief Consultant in Medicine to the First Army, holding the rank of Major. He later took the same title for the Second Army under Colonel Charles Ransom Reynolds (1877-1961), later Surgeon General.

Unsurprisingly, the "Spanish Flu" influenza epidemic was a frequent subject in his letters. The epidemic was in its most dangerous second wave when he arrived in France, and he was hardly a bystander: "Pneumonia and influenza are to be my problems, at least I propose what should be done, but that is not all in this game by any means, and most of all we must keep pounding the Boche [Germans] night and day" (12 October 1918). He tried to keep his letters upbeat, but his concern came through: "I hope you will try very hard not to get tired out or under-nourished, for these have been the chief factors in the spread of influenza here. Happily we seem to have gotten over the worst of it in our fighting line, which is my part of the job, though I am told they are having it further back. Be very careful and keep Ruth and mother D. out of crowds" (26 October). He reiterated on 26 November after further hard experience: "I am afraid you are not keeping yourself warm enough. Sleep, food and warmth keep the influenza away. You can not know how I worry about you, so do your very best."

Brooks worked near the front line, but was generally unable to offer much combat content due to military censorship. One exception was 10 November, the day before the Armistice, when he offered a long and detailed letter describing his work on the rapid final offensive. "With the infantry go the M.O.s [medical officers] establishing their stations as they proceed, and leaving non-coms and privates to continue the work as they can, and wherever possible to move the wounded back to points which can be reached by ambulances, going out also and collecting in a systematic way those who cannot come themselves to the dressing stations. . . . I got my first real whiff of gas today, got my mask on in jig time and rather enjoyed the experience. The next time it may be much worse and I shall be perfectly cool and collected." With the fighting over, he was freed to share more anecdotes about his experiences. He was eventually promoted to Lieutenant Colonel. His correspondence continues through the end of March 1919, when he began his journey home.

Also included are 25 war-date letters Brooks received from his wife and daughter; 9 other miscellaneous war-date letters; 3 photographs of Brooks in uniform; and his military decorations, said to have been removed from his uniform by his widow at his funeral. 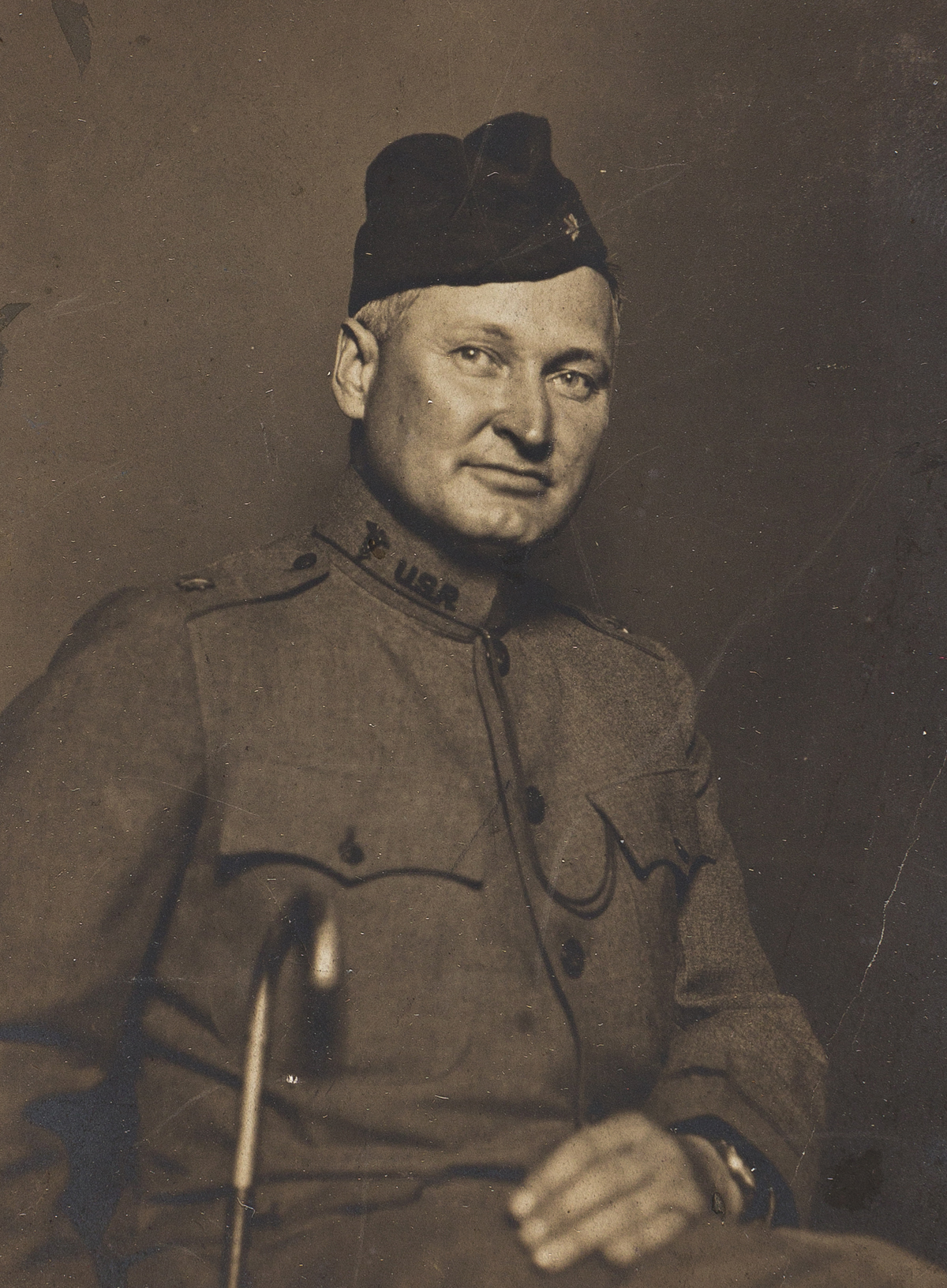