On the first morning of the Battle of Gettysburg, 1 July 1863, the Union Army's 1st Corps was buckling under the Confederate onslaught northwest of the town center. As they fell back to Cemetery Ridge, the 16th Maine Infantry was given an impossible task: hold their position at any cost, to slow down the Confederate advance and guard the Union retreat. They were soon surrounded and overwhelmed. Shortly before they were captured, the color guard tore up the blue and gold regimental flag, distributing pieces among the troops so the Confederates could not enjoy it as a trophy.

This view shows the 16th Maine shortly before they were overwhelmed. They are gathered in a tight semi-circle reminiscent of Custer's Last Stand, with saber-wielding officers issuing commands from within the circle, and dead and wounded comrades on all sides. In the foreground, a Union artilleryman and his horse lie dead beside a cannon. The much larger Confederate force, charging from the left, has suffered losses as well. Several other Confederate units can be seen far in the background, advancing without resistance. The "16th Maine Vols." battle flag and the Stars and Stripes are still waving proudly at the front of the Union line.

The painting is signed only "C.F.L." It does not seem to be copied from any other view, nor do any other depictions of the battle seem to be copied from it. While it could not have been sketched from life, it seems likely to have sprung from the memories of a 16th Maine participant. The only member of the regiment in 1863 whose initials match C.F.L. was Cherbury Fitzalan Lothrop (1838-1936), a farmer from Chesterville, ME who enlisted as a sergeant and mustered out as a 1st Lieutenant. He was taken prisoner at Gettysburg. After the war he ran a country store in Chesterville through 1890, was active in veteran affairs and his church choir, was a Baptist minister, and taught at the Maine Central Institute. He retired to his daughter's home in Everett, MA in the early 20th century. At Gettysburg, Lothrop was a first sergeant. A first sergeant is a focal point of the composition, holding his rifle with its butt to the ground just within the circle behind the battle flag, and coolly surveying the fighting.

The landscape is similar to the actual site of the 16th Maine's last stand. Their monument stands today on Doubleday Avenue in Gettysburg, near the present Doubleday Inn. Looking west from the road are rolling hills in the mid-ground, framed against larger hills in the background. The hills are not a perfect match, but some areas are now forested which may obscure the actual view. The artist may have painted the scene from memory, or visited the battlefield later in life to make sketches.

Provenance: this painting was owned circa 1978 by the Argosy Book Store, whose proprietor Ruth Shevin made a photograph still held in the reference files at the Winterthur Library in Delaware. Winterthur independently made the same attribution of Cherbury Lothrop as the likely artist. The painting was apparently sold to the consignor's mother between 1978 and her passing in 1981. 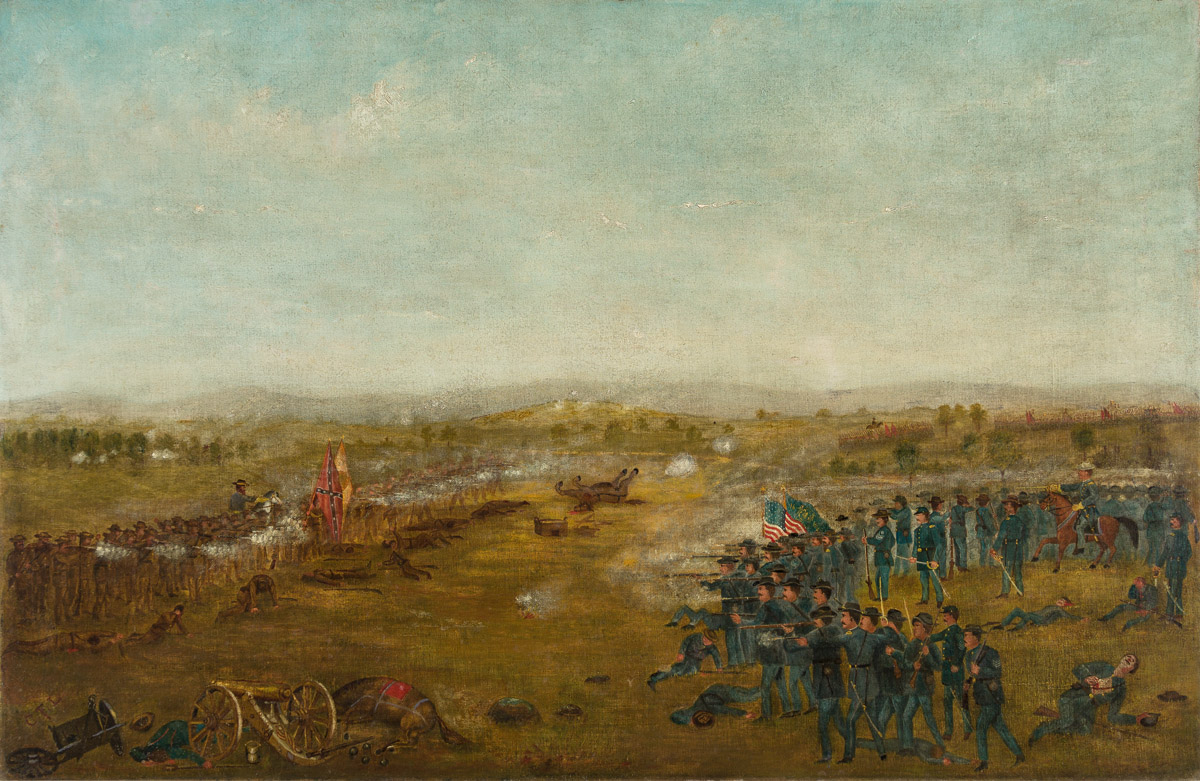