Katherine Dunham (1909-2006) was one of the most important American dancers of the 20th century. She led her own dance company, and ran her own school of dance in New York. A graduate of the University of Chicago, she was an accomplished anthropologist and scholar of dance in addition to her career on stage, and authored three books. Raised in Joliet, IL, she toured widely across several continents, residing at various points in New York, Hollywood, Haiti, and Tokyo as a true citizen of the world.

At the heart of this lot is her 42-page personal diary, mostly kept in 1958 while in Tokyo writing her memoir. It is a mix of traditional diary entries with bits of memoir and literary reflection. Typed passages from earlier volumes and other memoranda are frequently taped, stapled, or laid in. The entries range from lyrical landscape descriptions, to anthropological observations on Japanese culture, to bracingly frank comments on her personal life. Two recurring characters are her Japanese maid and the maid's boyfriend, a rockabilly enthusiast who absconded with a small sum of money. Dunham attended a Japanese rockabilly concert and reflected on its layers of cultural appropriation: 'Rockabilly show at Nichegeki with teenagers like reeking wet sardines throwing streamers and walking on stage embracing match-stick-legged performers in heavy ankle-high white rubber-soled moccasins . . . . Imitating Presley who imitates every blues shouter there ever was. I think of Joe Turner and Kokomo and Winona of Central Avenue when the big-busted oily-haired sisters walked onto the floor in ecstasy and put their dollar bills earned in Hollywood cleaning up after all-night brawls at Turner's and Winona's feet, real ecstasy rocking their bodies & shining their eyes. This is so puerile" (2 June 1958). In a similar vein, she wrote 'When all else has come & gone the Blues will remain deeply, securely embedded in the substratum of American culture. Constant reminder of Black races. Triumph' (5 February). The blues remained on her mind in Tokyo: "The workmen sound like Josh White singing a work song. It will help them through the night" (11 February). Among the bits of memoir interweaved into the text, she recalls serving as a flower girl at countless funerals in Joliet; discusses writing a disturbing passage on her father ("I left off at eleven last night unravelling Albert Dunham's incestuous desire for his daughter"); and proclaims 'The aggregate of Israelites evacuating the land of the pharoas could have felt no greater relief or keener joy than I did when I at last left Joliet for good.' Her complex marriage to John Pratt is discussed at length in one passage written on 2 November while in Haiti.

In moments of intellectual detachment came more abstract observations: 'Only upon the historian, the biographer falls the task of accuracy. The rest of us write things as we see them, or as we remember them to be. To make them believable, to live. Herein lies our artistry" (21 April). Typed passages reflect on her philosophy of dance: 'For a dancer the association must be voluntary, the spirit free, and the flesh willing; the aims multiple and common. . . . Perhaps because there is no actual necessity for tools, material, artifacts, the dance was perhaps the earliest artistic expression—and its psychokinesthetic usage gave it real urgency beyond other creative arts. . . . My mission is not to present beauty but to present truth. If the two go hand in hand, how fortunate I am.'

This lot also contains 43 photographs of Dunham and of her dancers. They include a postcard-sized photo signed and inscribed to her mother (illustrated); another signed by Dunham in East St. Louis circa 1969-70; a group shot of her with Jean Cocteau and Josephine Baker at an opening in Paris, 1950; one with Maurice Chevalier; a still from her film Stormy Weather, 1943; with her troupe being greeted off the airplane in Korea, 1956; and a 13 x 9-inch Life Magazine print, 1958. Skipping forward several generations is a pair of photographs of hip hop artist Wanda Dee, one of them in her touring role as Josephine Baker, both signed and inscribed warmly to Dunham as an elder role model, circa 2002.

Among the manuscripts found here are logistical correspondence and travel documents from her company's 1953 tour of Europe; 2 unsigned carbon letters from a New York associate suggesting the closure of her dance school, December 1953; and a 9 January 1954 carbon of her letter to manager Wilfred Wyler in New York: 'Could you advise me as to whether an actual lien has been made on the bank accounts? It looks as though I will have to stay out of America for some time! Anyway if we all keep trying surely something optimistic will happen.' On the business end are draft contracts for her performers, 1948 and 1950; 'Notes for Investor's Contract between Katherine Dunham, producer and Mr. Nat Goldstone' in 1947; and a draft promotional agreement with her manager Mr. Hurok, 1943. 6 cancelled checks are preserved with endorsement signatures by Dunham's 'Tropical Revue' dancers James Alexander, Gloria Mitchell, Wilbert Bradley, Dolores Harper, and most notably two by Eartha Kitt, 1945-46; a clipped signature of Langston Hughes dated 8 April 1938 is part of this small autograph collection. Also included is a laminated manuscript plat map from her Haiti property dated 1972.

Rounding out the collection are a group of 6 programs from the 1940s and 1950s, including her important 'Tropical Revue', 'Bal Negre," and 'Caribbean Rhapsody" tours. An undated broadside advertises an early show at the Palacios de Bellas Artes in Mexico. The earliest item is a 1935 steamship passenger list listing Miss K. Dunham as a first-class passenger.

Manuscript diaries from cultural figures of Dunham's significance are not often seen on the market. This one is not only intellectually vigorous and deeply personal, it is also embellished by the context of photographs, letters, and other documents. A more detailed inventory is available upon request. 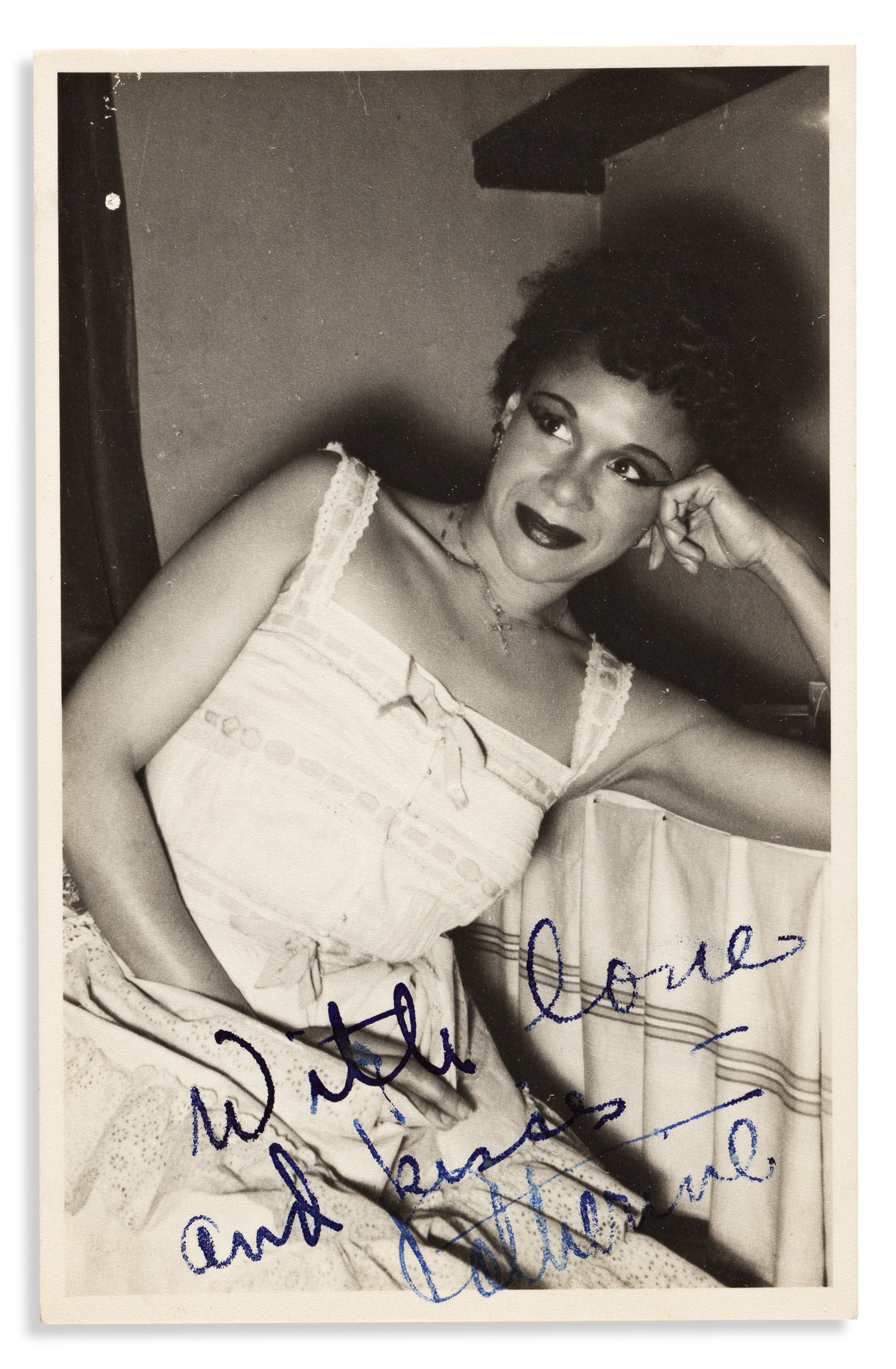