Price Realized: $ 8,500
Price Realized: $ 10,625
?Final Price Realized includes Buyer’s Premium added to Hammer Price
Estimate: $ 8,000 - $ 12,000
ALPHONSE MUCHA (1860-1939) "SLOVANSKÁ EPOPEJ." 1928.
69 5/8x29 3/4 inches, 176 7/8x75 1/2 cm. V. Neubert A. Synove, Prague.
Condition B+: minor repaired tears in margins; creases in margins and image; minor overpainting in lower left image; slight discoloration at upper left edge. Two-sheets. Framed. Unexamined out of frame.
"Alphonse Mucha considered The Slav Epic, a series of twenty monumental paintings depicting the Slav People, his most important and meaningful artistic and personal accomplishment. The idea of creating large mural paintings from the history of the Slavs as a gift to his nation satisfied his need to prove his talent as a painter, to express the sincere patriotic feelings for his native land and to declare his allegiance to the concept of Pan-Slavic unity" (The Spirit of Art Nouveau p. 96). Although Mucha originally conceived of this project as early as 1899, he did not begin work on the giant canvases (some as large as 18 feet tall) until 1910. He finished the project 18 years later and gifted them to the city of Prague. This poster advertises the exhibition of the completed works. The text banner was printed separately, and in this rare instance promotes the Slav Epic exhibition which opened in 1930 in Brno, Czechoslovakia's second largest city. which opened in 1930. "Mucha's design contains symbolic incidents from early Slavic history. In the background is an image of the powerful three-faced Slavic pagan god Svantovit with a sword and a drinking cup made of horn, in which the level of wine predicted good or poor harvest. The young Slav girl in the foreground is strumming on an instrument similar to a harp. On its upper end, the red head of a cock . . . on its lower end, a nightingale sings in front of a pale moon-like circle" (Spirit of Art Nouveau p. 326). The model for young girl is actually Mucha's daughter, Jaroslava, and this image of her appeared in the 18th painting in the series, The Oath of Omladina under the Slavic Linden Tree. Rennert / Weill 111, Lendl p. 294, Brno 74 (var), Arco p. 98, Sarah Mucha p. 93, Mucha / Henderson 116, Mucha / Bridges A71, Jiri Mucha p. 284, Spirit of Art Nouveau 126.
Set Alert for Similar Items 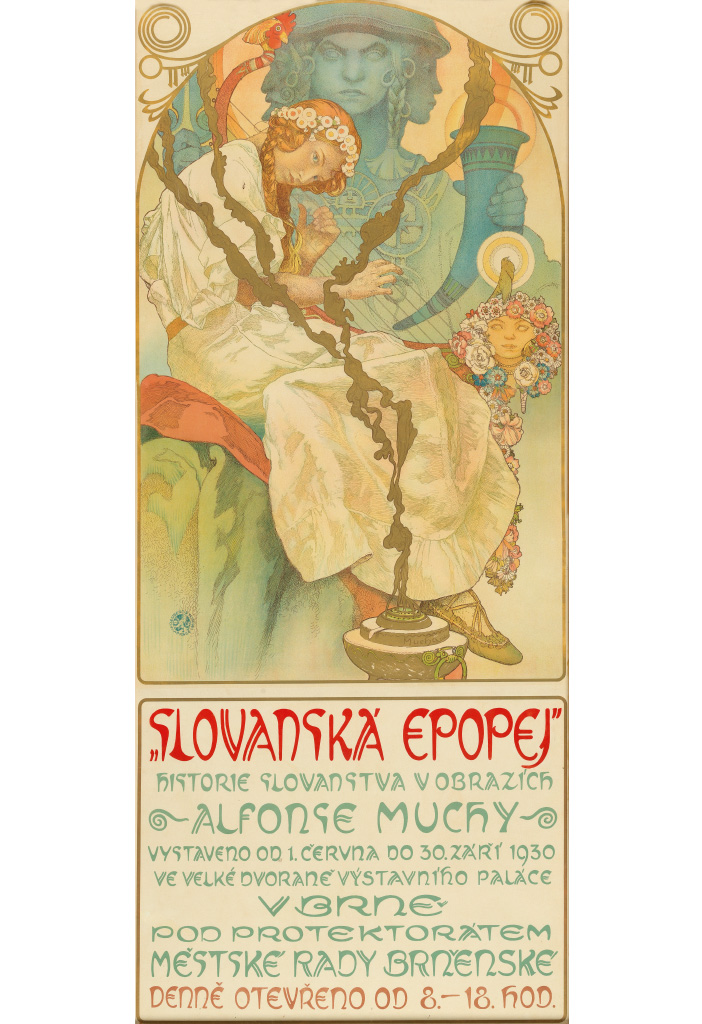