"The rarest and most important atlas treating the events of the American Revolution was The North American Atlas published by William Faden in 1777. The total number of maps in this atlas varies with the specific edition, but twenty-seven were always present. Although the great regional maps of the period were represented, the atlas's major historical contribution is the series of detailed battle plans drawn by eyewitness observers." -- Schwartz & Ehrenberg, The Mapping of America, page 204.

Copies of this atlas were made-to-order, with individual buyers choosing additional maps to augment a core that roughly followed those included in Jefferys's American Atlas. This is an exceptionally large example of The North American Atlas; according to our survey, its complement of 42 maps is superseded only by that of the Sir Thomas Phillipps copy, which lists 53 maps, but had only 36 maps dealing specifically with the North American theater. All 42 maps in the present copy are dedicated to that arena. The copy in the British Library's George III Topographical Collection lists 40 maps on 48 sheets. The Streeter copy had only 42 sheets.

Although the man who commissioned the atlas is unknown, he appears to have had a particular interest in military matters; the inclusion of the Burgoyne maps (probably specially printed for this atlas, with very wide margins), and the Faden Philadelphia (Nebenzahl, BAR, 128) rather than the Scull and Heap Philadelphia (seen in most other copies), evinces a penchant for battle plans keener than that of the usual buyer.

2. A CHART of PART of the COAST OF LABRADORE, from CAPE CHARLES to SANDWICH BAY. Survey'd by Order of the Honble COMMODORE BYRON, Governor of Newfoundland, Labradore, &c. in the Years 1770 and 1771. By Michael Lane, Surveyor. London: Wm. Faden, [1777]
Phillips, Maps, 355.

3. A CHART OF THE GULF OF ST. LAURENCE, COMPOSED FROM A GREAT NUMBER OF ACTUAL SURVEYS AND OTHER MATERIALS, Regulated and Connected by Astronomical Observations. Double-page engraved map, hand-colored in outline. London: Rob. Sayer & Jn. Bennett, 25th March 1775 [but 1777]
Kershaw 597, first state.

4. A GENERAL CHART OF THE ISLAND OF NEWFOUNDLAND with the Rocks & Soundings. Drawn from SURVEYS taken by ORDER of the RIGHT HONOURABLE the LORDS COMMISSIONERS of the ADMIRALTY. By James Cook and Michael Lane Surveyors and Others. Double-page engraved folding map, Newfoundland hand-colored. Bottom edge trimmed at time of binding barely affecting neatline. London: Thomas Jefferys; Printed by Robt. Sayer & Jn. Bennett, 10th May 1775
Kershaw 539, second state (of 4).

5. A MAP of the INHABITED PART OF CANADA, from the French Surveys; with the Frontiers of NEW YORK and NEW ENGLAND; from the Large Survey By CLAUDE JOSEPH SAUTHIER. Engraved by Wm. FADEN, 1777. Engraved folding map. Bodies of water and borders hand-colored. Light foxing around gutter. London: Wm. Faden, Feby. 25, 1777
Nebenzahl, BAR, 43, third state (of 3), with the dedication to Burgoyne only.

6. PLAN of the CITY AND ENVIRONS OF QUEBEC, with ITS SIEGE and BLOCKADE by THE AMERICANS. From the 8th of December 1775 to the 13th of May 1776. Double-page engraved map. Minor offsetting. London: "the late Mr. Thos. Jefferys" [Faden]
Nebenzahl, BAR, 44.

7. A MAP of the COUNTRY in which the Army under LT. GENERAL BURGOYNE acted in the Campaign of 1777, shewing the Marches of the Army & the Places of the principal Actions. Drawn by Mr. MEDCALFE & Engraved by Wm. FADEN. Double-page engraved map. Very wide margins. Offsetting. London: Wm. Faden, 1780
Nebenzahl, BAR, 48.

10. PLAN of the ENCAMPMENT and POSITION of the ARMY under HIS EXCELLY. LT. GENERAL BURGOYNE at SWORDS HOUSE on Hudson's River near Stillwater on Septr. 17th. With the Positions of that part of the Army engaged on the 19th. Septr. 1777. Drawn by W.C. Wilkinson Lt. 62d. Regt. Afst. Engr. London: W. Faden, 1 February 1780.
Nebenzahl, BAR, 53.

11. PLAN of the ENCAMPMENT and POSITION of the ARMY under HIS EXCELLY. LT. GENERAL BURGOYNE at BRÆMUS HEIGHTS on Hudson's River near Stillwater, on the 20th Septr. With the Position of the Detachment &c. in the Action of the 7th of Octr. & the Position of the Army on the 8th Octr. 1777. Drawn by W.C.Wilkinson Lt. 62 Regt. Afst. Engr. Engraved by Wm. Faden. London: Wm. Faden, Feby. 1st. 1780
With additional onlaid slip.
Nebenzahl, BAR, 56.

13. A NEW MAP of NOVA SCOTIA, and CAPE BRITAIN. With the adjacent parts of NEW ENGLAND and CANADA, Composed from a great number of actual Surveys; and other materials. London: Thos. Jefferys, [1755, but surely later].
With small manuscript additions in pencil seemingly plotting out the area covered by a large chart of Nova Scotia, perhaps one related to the Montresor.
Stevens & Tree 66(b).

14. A MAP of the most INHABITED part of NEW ENGLAND: containing the PROVINCES of MASSACHUSETS BAY and NEW HAMPSHIRE with the COLONIES of CONECTICUT and RHODE ISLAND. London: Thos. Jefferys, 29 November 1774.
Stevens & Tree 33(e).

15. BOSTON its ENVIRONS and HARBOUR, with the REBELS WORKS RAISE AGAINST THAT TOWN IN 1775. from the Observations of LIEUT. PAGE of HIS MAJESTY'S Corps of Engineers, and from the Plans of Capt. Montresor. London: Wm. Faden, 1 October 1778.
Nebenzahl, BAR, 21; Stevens & Tree 77(b). With extended sheet.

16. A PLAN of THE TOWN OF BOSTON, with the INTRENCHMENTS &c. OF HIS MAJESTYS FORCES in 1775: from the Observations of LIEUT. PAGE of HIS MAJESTY'S Corps of Engineers; and from the Plans of other GENTLEMEN. London: Wm. FADEN, 1777.
Nebenzahl, BAR, 22.

17. A PLAN OF THE ACTION AT BUNKERS HILL, on the 17th of June 1775. Between HIS MAJESTY'S TROOPS, Under the COMMAND of MAJOR GENERAL HOWE, AND THE REBEL FORCES, by LIEUT PAGE of the Engineers, who acted as Aide de Camp to General Howe in that Action. N.B. The Ground Plan is from an Actual Survey by Captn. Montresor. [London, Faden, 1775-78]
Nebenzahl, BAR, 29.

18. A Topographical CHART of the BAY of NARRAGANSET in the Province of NEW ENGLAND, with all the ISLES contained therein, among which RHODE ISLAND and CONNONICUT have been particularly SURVEYED. . . By CHARLES BLASKOWITZ. London: Wm. FADEN, 22 July 1777.
Nebenzahl, BAR, 34.

20. A MAP of the PROVINCE of NEW-YORK, Reduc'd from the Large Drawing of that Province, Compiled from Actual Surveys by Order of His Excellency WILLIAM TYRON Esqr. Captain General & Governor of the same, by CLAUDE JOSEPH SAUTHIER; to which is Added NEW-JERSEY, from Topographical Observations of C.J. SAUTHIER & B. RATZER. London: Wm. FADEN, 1 August 1776
Schwartz & Ehrenberg, page 187-188.

23. A Topographical MAP of HUDSONS RIVER, with the CHANNELS Depth of Water, Rocks, Shoals &c, and the COUNTRY adjacent, from SANDY-HOOK, NEW YORK and BAY to FORT EDWARD, also the Communication with CANADA by LAKE GEORGE and LAKE CHAMPLAIN, as high as FORT CHAMBLY on Sorel River. By CLAUDE JOSEPH SAUTHIER. London: WILLIAM FADEN, 1 October 1776.
Stevens & Tree 23(c), third state (of 4).

24. THE ATTACK AND DEFEAT OF THE AMERICAN FLEET under Benedict Arnold, by THE KINGS FLEET Commanded by CAPTN. THOS. PRINGLE, upon LAKE CHAMPLAIN, the 11th of October 1776.
Nebenzahl, BAR, 47; Stevens & Tree 24(b), with letterpress text below.

25. A PLAN OF THE OPERATIONS of the KING'S ARMY under the Command of GENERAL SR. WILLIAM HOWE, K.B. IN NEW YORK AND EAST NEW JERSEY, against the AMERICAN FORCES Commanded By GENERAL WASHINGTON, from the 12th of October, to the 28th of November 1776.
Nebenzahl, BAR, 101; Stevens & Tree 45(b), with the ships off Tarrytown.

26. A Topographical MAP of the Northn. Part OF NEW YORK ISLAND, Exhibiting the PLAN of FORT WASHINGTON, now FORT KNYPHAUSEN, With the Rebels Lines to the Southward, which were Forced by the Troops under the Command of THE Rt. Honble. EARL PERCY, on the 16th Novr. 1776, and Survey'd immediately after by Order of his Lordship, by CLAUDE JOSEPH SAUTHIER, To which is added the Attack made to the Northd. By the Hessians Survey'd by Order of Lieut. Genl. Knyphausen. London: Wm. FADEN, 1777.
Nebenzahl, BAR, 116; Stokes I, 355-356. Second state, with "Hessian Column".

30. A PLAN of the CITY and ENVIRONS of PHILADELPHIA, with the WORKS and ENCAMPLMENTS of His MAJESTY'S Forces. Under the Command of Lieutenant General SIR WILLIAM HOWE, K.B. London: Wm. FADEN, 1 January 1779.
Nebenzahl, BAR, 128.

31. A CHART of DELAWARE BAY and RIVER, Containing a full & exact description of the Shores, Creeks, Harbours, Soundings, Shoals, Sands and Bearings of the most considerable Land Marks from the CAPES to PHILADELPHIA. Taken from the Original Chart Published at Philadelphia by JOSHUA FISHER. London: Wm. FADEN, March 1776.
Snyder, City of Independence, 265a. First English edition.

33. BRITISH CAMP AT TRUDRUFFRIN from the 18th to the 21st of September 1777. with the ATTACK made by MAJOR GENERAL GREY against the REBELS near WHITE HORSE TAVERN, on the 20th of September. Drawn by an Officer on the Spot. London: Wm. Faden, 1 July 1778.
Nebenzahl, BAR, 127.

34. THE COURSE OF THE DELAWARE RIVER from PHILADELPHIA to CHESTER, with SEVERAL FORTS and STACKADOES raised by THE REBELS, and THE ATTACKS made By His MAJESTY'S LAND and SEA FORCES. London: Wm. Faden, 20 March 1779.
Nebezahl, BAR, 132; Stevens & Tree 17, intermediate state not listed, i.e., between (a) and (b).

37. AN ACCURATE MAP OF NORTH AND SOUTH CAROLINA WITH THEIR INDIAN FRONTIERS, Shewing in a distinct manner all the MOUNTAINS, RIVERS, SWAMPS, MARSHES, BAYS, CREEKS, HARBOURS, SANDBANKS and SOUNDINGS on the COASTS; with The ROADS and INDIAN PATHS; as well as The BOUNDARY of PROVINCIAL LINES, The Several TOWNSHIPS and other divisions of the LAND IN BOTH THE PROVINCES; the whole FROM ACTUAL SURVEYS BY HENRY MOUZON and OTHERS. London: Robt. Sayer & J. Bennett, 30 May 1775.
Stevens & Tree 11(a).

38. A PLAN OF THE ATTACK OF FORT SULIVAN, near CHARLES TOWN in SOUTH CAROLINA. By a Squadron of His Majesty's Ships, on the 28th of June 1776, with the Disposition of the King's Land Forces, and the Encampments and Entrenchments of the REBELS from the Drawings made on the Spot Engraved by Wm. Faden. London: Wm. Faden, 10 August 1776. [With the letterpress text below.]
Stevens & Tree 14(d).

40. The Bay of ESPIRITU SANTO, on the Western Coast of EAST FLORIDA. [on sheet with:] PLAN of the TOWN of ST. AUGUSTINE the CAPITAL of EAST FLORIDA. London: Wm. Faden, [circa 1777]
Phillips, Maps, page 755 (earlier state of second map).

42. COURSE OF THE RIVER MISSISSIPI from the BALISE to FORT CHARTRES: Taken on an EXPEDITION to the ILLINOIS, in the latter end of the Year 1763. By Lieut. Ross of the 34th Regiment: IMPROVED from the Surveys of that River made by the French. London: Robt. Sayer,1 June 1775.
Stevens & Tree 31(b). 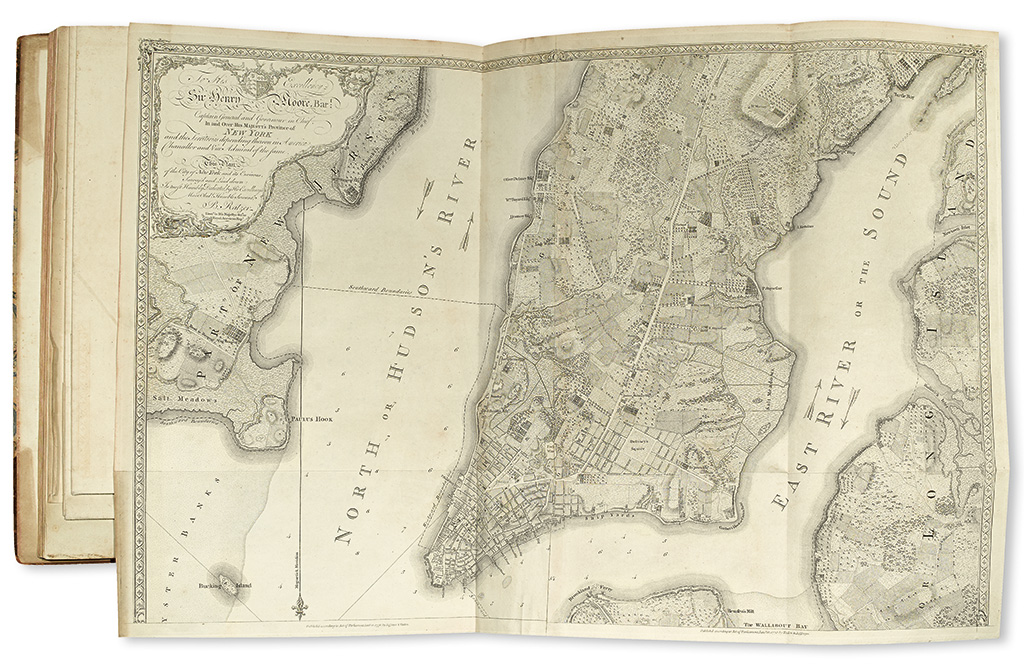 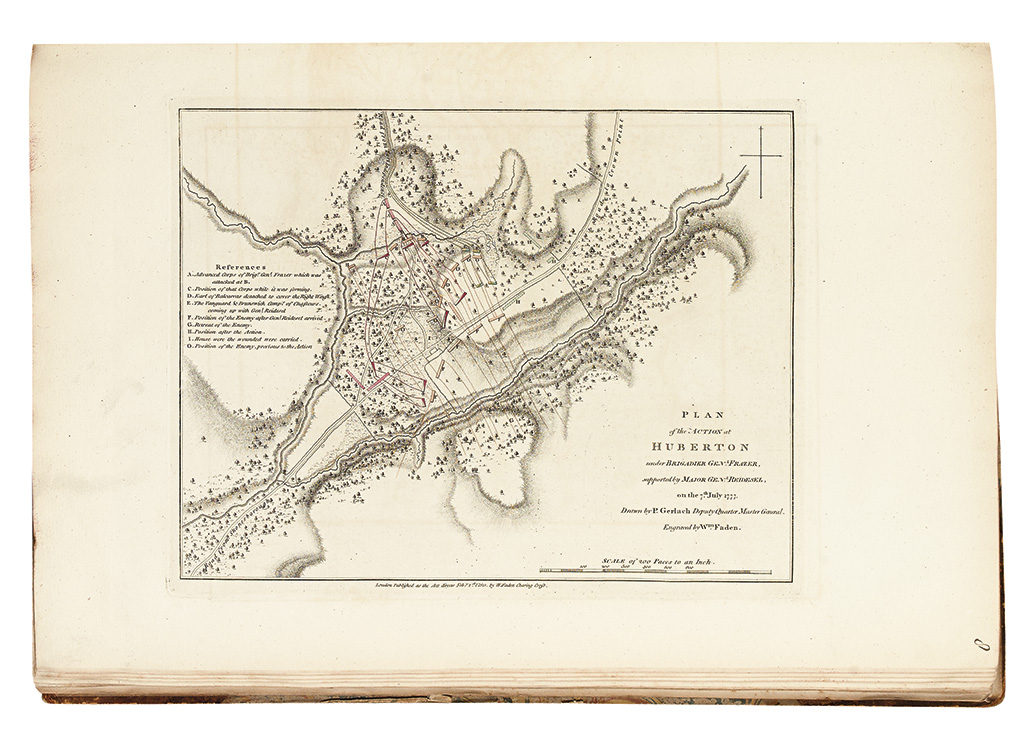