Both pen and ink and pencil on cream laid paper. Both approximately 380x525 mm; 15x20 3/4 inches, the full sheets with deckled edges. Both extensively annotated in ink with descriptions of the machinery.

With a letter from Carlo Pedretti to Houthakker, dated March 5, 1972, regarding the authorship and ascribing the drawings to Martini, indicating that, "One of them may even be interpreted as the record of a device that Francesco di Gorgio had sent to Leonardo . . . there are drawings by Leonardo that reproduce the same instrument."

According to Brown, Martini was, "Active as an architect and architectural theorist, engineer, sculptor, and painter, [he] has rightly been called the 'Leonardo da Vinci of Siena.' As demonstrated by a series of exhibitions in the 1980s and 1990s devoted to him and his contemporaries, he was the most significant artistic figure in the city during the second half of the 15th century. Francesco was keenly responsive to the work of other artists--including Donatello and the North Italian miniaturists Liberale da Verona and Girolamo da Cremona, all three of whom worked in Siena--as well as Pollaiuolo and Verrocchio, whose productions he came to know in Florence. As a painter, he seems to have been trained by the painter/sculptor Vecchietta or, according to a more recent hypothesis, Sano di Pietro. Francesco is known to have shared a workshop with yet another painter/sculptor, Neroccio de' Landi, from the late 1460s to 1475, when their partnership was dissolved. Not long afterward he left Siena to work as sculptor, architect and military engineer, for Duke Federigo da Montefeltro in Urbino. His services were also in demand at the Sforza court in Milan, where he must have encountered Leonardo, who owned and annotated one of his manuscripts (now in the Biblioteca Laurenziana, Florence). Francesco's only signed painting is the Nativity with Saints of 1475, from the Olivetan monastery of Porta Tufi, now in the Pinacoteca Nazionale, Siena" (see Brown, Italian Paintings of the Fifteenth Century, Washington, D.C., 2003).

Many similar drawings by Martini can be found in his manuscript Edificij et machine, circa 1475-80, a volume with 103 ink drawings of machines and devices for lifting columns and other heavy weights, schemes for transporting water and mechanisms for milling and moving boats, in the Liszt Collection, notably folios 22, 40, 43 and 44, which show similar mill machinery with wheels and one powered by a horse.

A volume with a collection of similar ink drawings of machines and engineering devices, that is a version of another manuscript now in the British Museum, London, which is thought to be the volume recorded in the Ducal Library, Urbino, prepared by Francesco di Giorgio for Federico da Montefeltro, was offered at Sotheby's, London, July 6, 1987, lot 93. This manuscript is discussed in Popham and Pouncey, Italian Drawings . . . The Fourteenth and Fifteenth Centuries, London, 1950, pages 32-38.
Set Alert for Similar Items 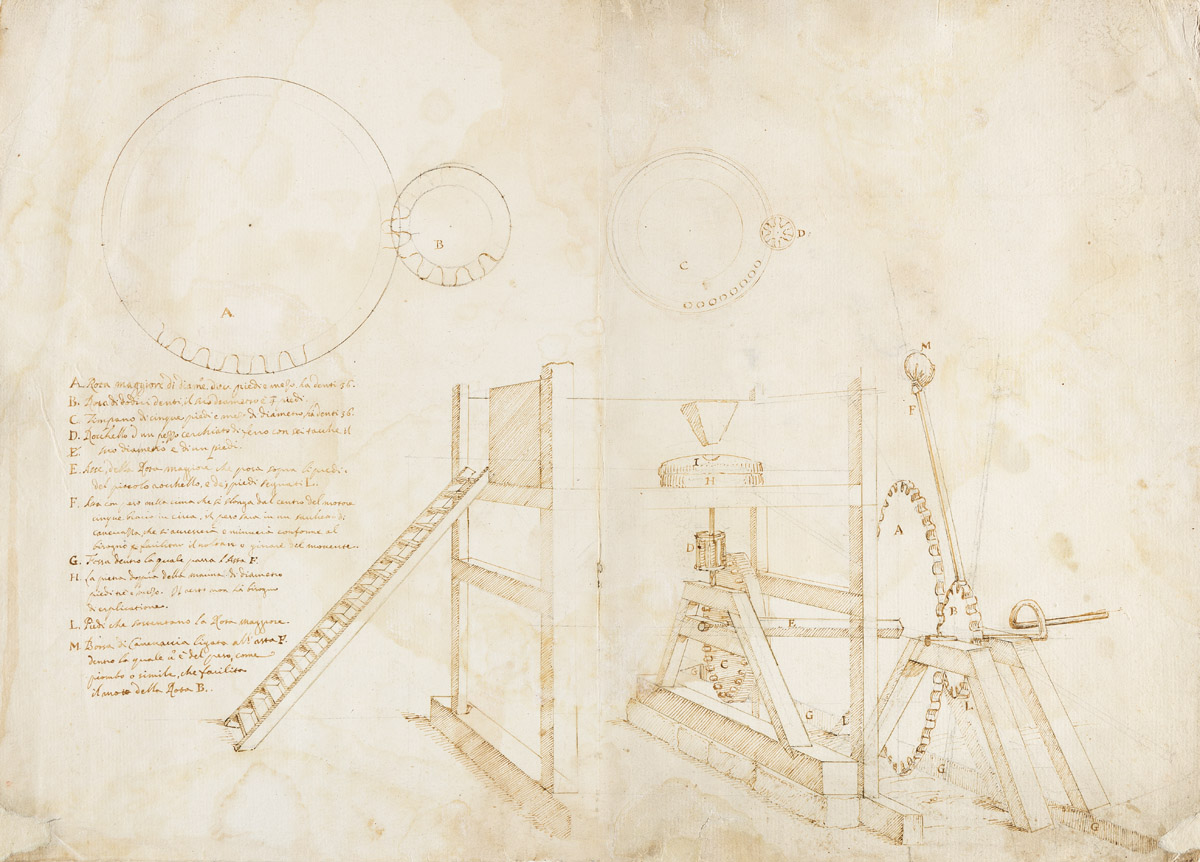