Price Realized: $ 750
Price Realized: $ 975
?Final Price Realized includes Buyer’s Premium added to Hammer Price
Estimate: $ 1,000 - $ 1,500
AGAINST BUDDHISM, HE IS "ENGAGED IN SWEEPING OUT THE DUST OF SUPERSTITION" HEARST, WILLIAM RANDOLPH. Two letters, each Signed "WRHearst," to Clara R. Anthony, including a lengthy Autograph Letter concerning superstition. The first, TLS, remarking that the attack on himself by [Grove Laurence] Johnson was a natural reaction to Johnson's having been exposed as a villain by the Examiner, explaining that [publisher Andrew] Miller of Life had requested confirmation of the facts before publishing the article, and pointing out that the comic supplement competes with the weekly newspapers. 1 page, 4to, "New York Journal" stationery; few short closed tears at edges, inscription on verso by "Mama Anthony" remarking that the contents are characteristic of Hearst, folds. The second, ALS, sending a gift [not present], complaining of the boredom of life in Washington, and elaborately claiming that Buddhism is like the other superstitions that reason has left behind. 7 1/2 pages, 4to, written on two folded sheets, ruled paper; few short closed separations at folds, faint scattered soiling. [New York], 1 February 1897; Np, nd
Set Alert for Similar Items

1 February 1897: "It is impossible to prevent this kind of an attack. Mr. Johnson, who made the attack in the House is a corrupt man, whose re-election to Congress the Examiner prevented. . . . [H]e was forced by Judge Maguire to admit on the floor of the House that the charge which the Examiner had made to the effect that he, Johnson, was under indictment for forgery, was true. . . . If I should ever have the good fortune to become a prominent citizen, these attacks will become more frequent, especially as the prominence is largely brought about by the expos[ur]e of villainry and corruption by the Examiner and Journal. . . ."
Nd: ". . . There are no longer enjoyable excursions to Mount Vernon nor delightful drives . . . ; and a poor substitute for these is a visit to the Capitol to hear some dough-headed senator droning monotonously about the presidential prerogative. . . .
". . . Speaking of Buddhism,--for of course we have been speaking of Buddhism ever since the Waters's arrived in Washington--I have made up my opinion . . . . Buddhism is but a form of religion, and religion is but the worship of the unknown god, i.e., the god of the unknown. Man is most impressed by what he can not understand, and awe for the unknown has been the origin of religion and is now the stimulant that keeps life in the expiring theory. As science advances, superstition recedes; and the religion of today is the superstition of to-morrow. On these two propositions hang all the law and the prophets.
"The religious chamber of one's brain is generally a room set apart from the rest; dark and somber, gloomy and mysterious. On its threshold the hurrying step must pause and echoing laughter cease; and whoever enters there does so with bated breath . . . lest he should disturb some article of the furniture, the very arrangement of which has been rendered sacred by the custom of centuries. In a word, the religious chamber is the haunted room of the intellectual edifice.
"Now we of the nineteenth century had begun to lose our dread of this spectral apartment. Some intrepid individuals had thrown open the windows and let in the light of reason, and the mysteries and terrors of the chamber had vanished with the shadows. We were engaged in sweeping out the dust of superstition, brushing down the cabinets of bigotry and mashing the ugly spiders of intolerance, and had actually succeeded in making the room useful and habitable, except to the more timid of us, when along comes our friend from India, and expresses surprise at finding our mental habitations free from banshees.
". . . He looks down upon us and remarks with an air of superiority that he might have told us anytime these thousands of years past that THAT room wasn't haunted. 'But,' says he, 'this room directly opposite is, and let me tell you, my Christian friend, the number of bogies in that apartment is simply appalling.'
"Now, are we going to allow ourselves to be hoodood . . . I, for one, am not. . . . Even if I should hear mysterious scratchings issuing from the suspected apartment in the dead of night, I should not be convinced. . . .
". . . Perhaps the bandages have been removed from our eyes too suddenly, and in the full glare of the glorious sun we are so dazzled that we long for darkness again. Mankind has been reared at the breast of religion and is only now being weaned. . . . He will soon . . . turn his attention to the plain practical fare of common sense and hard fact;--good food to grow on. . . ." 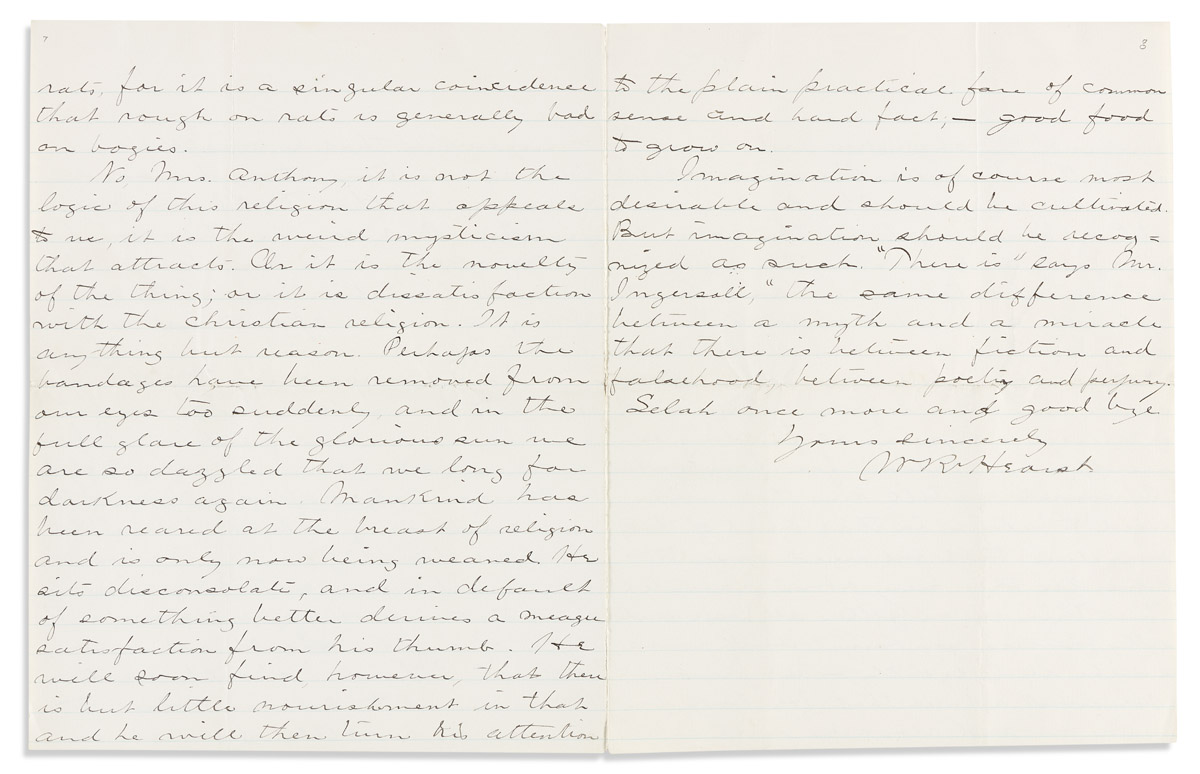