Provenance: acquired directly from the artist; the estate of Dr. Maya Angelou

Illustrated: The Art of John Biggers: View from the Upper Room, The Museum of Fine Arts, Houston, TX, p. 89, fig. 38.

Kumasi Market is a significant and panoramic oil by John Biggers which epitomizes his interest in African culture. Based on Biggers' experiences in Ghana in the late 1950s, this densely painted scene displays the artist's intense observation of a large market, a busy meeting place primarily populated by women. The colors, shapes and patterns fill the scene with details of daily life that Biggers carefully recorded. It is not only a depiction of the woman's important role in Ghanaian culture, but a reflection by the artist on the universal aspects of African women.

John Biggers' painting represents the importance of the African woman in her society. Biggers had said that "Africa has a female sensibility", and "the woman was so powerful in African culture." In 1957, Biggers was one of the first African-American artists to visit Africa, sponsored by a UNESCO fellowship to study and record traditional African culture. In addition to Ghana, John and his wife Hazel visited Togo, the Republic of Benin and Nigeria over a six month period. Ghana had only just achieved its independence from Britain in March of that year.

Upon his return, between 1959 and 1963, Biggers created the monumental painting, Jubilee: Ghana Harvest Festival, now in the Museum of Fine Arts, Houston and a group of these large paintings. In addition to Kumasi Market, Biggers painted Market Women, Ghana, ex-collection Golden State Mutual Life Insurance Company, and Laundry Women (Washerwomen in Volta Region), collection Diggs Gallery, Winston-Salem University. Biggers also illustrated eighty-three of his drawings from this African period in Ananse: The Web of Life in Africa published in 1962. Wardlaw p. 86 and 165.
Set Alert for Similar Items 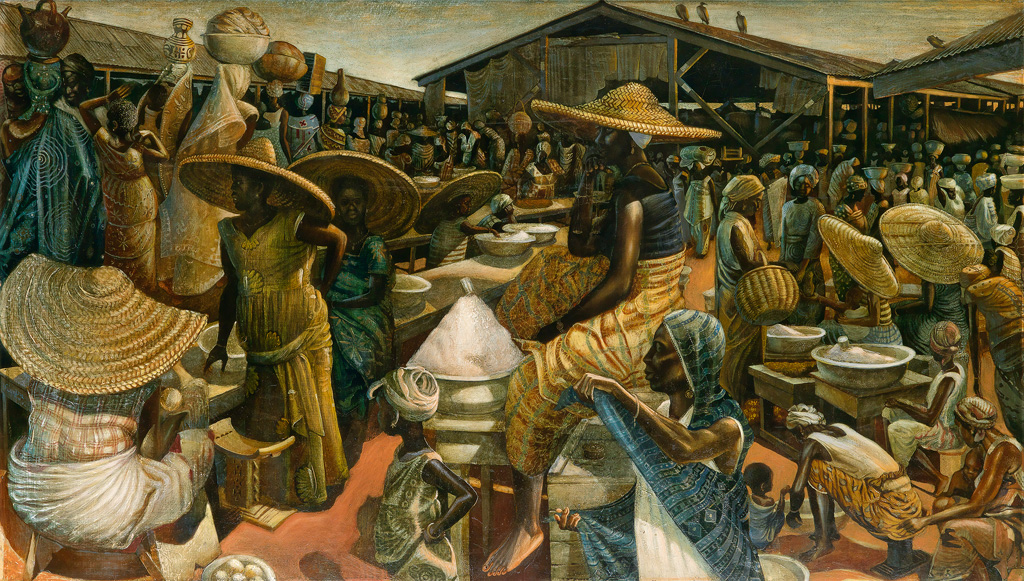