Provenance: the artist; Jack Shainman Gallery, Washington, DC; private collection (2004), with the artist's hand-written label and the gallery label on the verso.

Reclining Woman is also described in detail in the September 17, 1993 Washington Post review of this exhibiton, "Mr. Robinson's Neighborhood" by Paul Richard.

This beautiful portrait of the artist's beloved wife Gladys is an important painting by John N. Robinson, a great artist whose work rarely comes to auction. This native Washington, DC painter should be considered a significant modern portrait artist alongside Archibald M. Motley. Robinson excelled at warm depictions of African American friends and family, in addition a series of striking self-portraits. But, despite a long career and museum exhibitions, Robinson's work went largely unheralded outside of Washington, DC during his lifetime.

Born in "Holy Hill", a poor, segregated neighborhood of Georgetown, Robinson was raised by his grandparents at the age of eight following his mother's death. Having to work to support the family, he left high school at the age of fifteen without any formal art training. Robinson still took to drawing as a teenager, sketching on the back of timecards in the parking garage where he worked alongside his grandfather, the night watchman. Robinson had a break when a group of these sketches was brought to the attention of James V. Herring, the director of the fine art department at Howard University. In exchange for some office work, Robinson was granted a semester of instruction under the artist and art historian Professor James A. Porter. Unable to continue his formal instruction, Robinson nevertheless devoted his life to painting whenever he was not working. When he was seventeen, Robinson's grandparents moved to the Anacostia neighborhood of Garfield Park in Southeast Washington. His new next-door neighbor was Gladys Washington - they married in 1934 and had six children. After a brief time in the Civilian Conservation Corps, in 1935 Robinson began working at St. Elizabeth's Hospital, where worked his way up from an assistant to a supervisory cook over a thirty-five year career.

One of his best-known paintings is a stunning portrait of his grandparents in their Anacostia home in the collection of Howard University, Mr. and Mrs. Barton, 1941-42, which won a prize at the fourth annual Exhibition of Paintings at Atlanta University. Robinson is often associated with the Barnett-Aden Gallery in Washington, DC, opened by Herring and his partner the curator Alonzo J. Aden in 1943 in their townhouse's ground floor. Robinson was included in several group exhibitions there between 1945 and 1952. Robinson showed alongside other emerging great talents as Elizabeth Catlett, Eldzier Cortor, Lois Mailou Jones, Alma Thomas and Hale Woodruff. He painted many striking self-portraits - Self-Portrait of a Young Man, 1940 is still today in the celebrated Barnett-Aden Collection. Another significant painting in the collection is his First Gallery, 1947, a depiction of the Barnett-Aden gallery interior, with Alonzo Aden seated at his desk.

In Reclining Woman (Gladys), Robinson lovingly captures not just a likeness of his wife but the intimacy and warmth found in a beautiful moment of repose. Robinson excels in capturing the uniqueness of a subject with the varied materiality of his paint. Every different surface is sumptuously captured in paint: from the lightness of the lace drapery to the weight of the pink wool blanket. Details like the advertisements in the magazine and the view of the building seen through the drapes demonstrate his commitment to realism.

Robinson received more recognition for his painting late in his career. He had a solo exhibition at the Corcoran Gallery of Art in 1976, and a retrospective at the Anacostia Museum and Center for African American History and Culture in 1983. His paintings are found today in the permanent collections of the National Portrait Gallery, Anacostia Community Museum, the Smithsonian American Art Museum and the Howard University Gallery of Art.
Set Alert for Similar Items 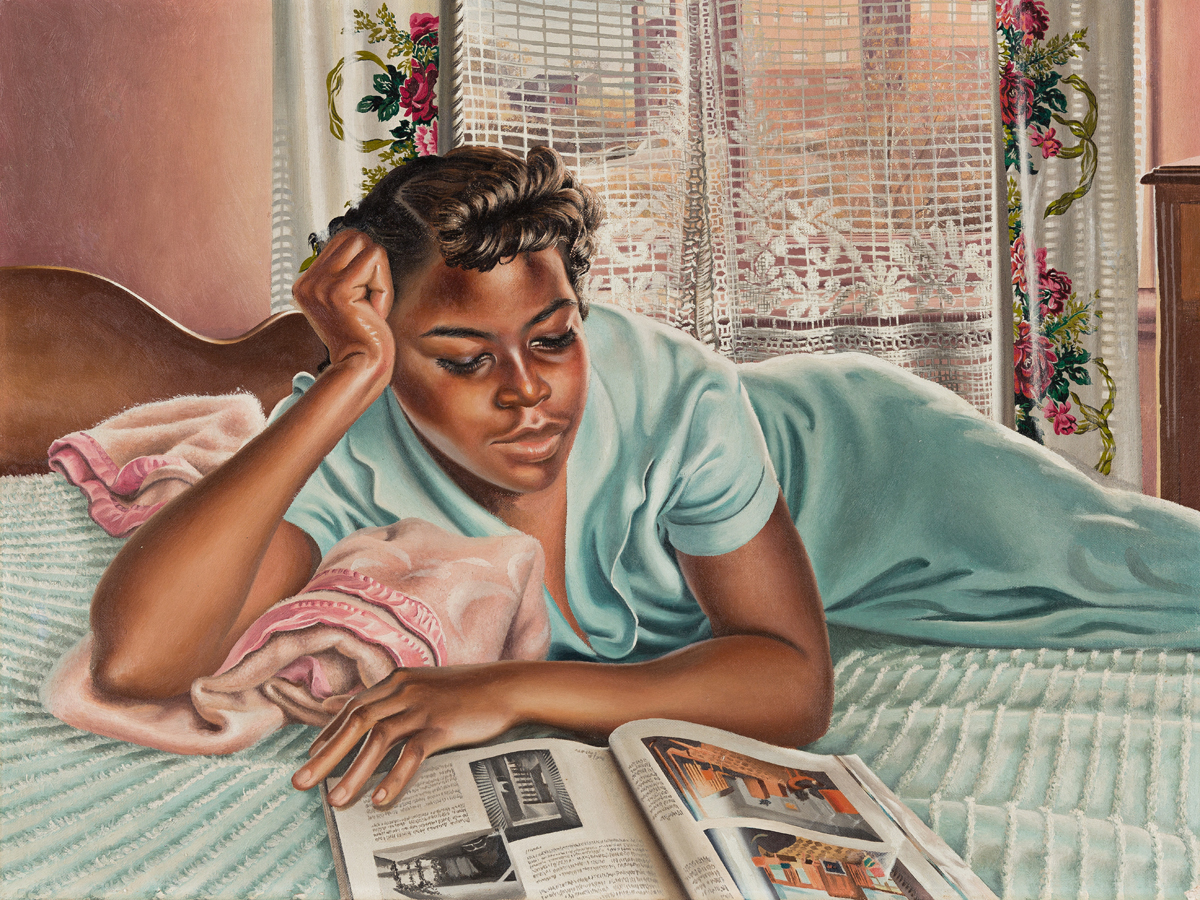