Unsold
Estimate: $ 6,000 - $ 9,000
O' GALOP (MARIUS ROSSILLON 1867-1946) NUNC EST BIBENDUM / LE PNEU MICHELIN BOIT L'OBSTACLE. Circa 1898.
61x44 inches. Chaix, Paris.
Condition B+: restoration along vertical and horizontal folds; restored loss in bottom margin; repaired tears in margins.
In 1894, at the international exhibition in Lyon, Michelin's staff had arranged a display of a large pile of tires. Rumor has it that when brothers Andre and Edouard Michelin saw the arrangement, one of them uttered, "If it had arms it would look like a man." Shortly after this observation, O'Galop came to the brothers with an idea for a poster, based on a picture he had found of a portly German holding aloft a stein of beer and giving the following toast "nunc est bibendum" ("now is the time to drink," a line from an ode by Horace). In 1898, with this poster, combining the man-like pile of tires, and the "time to drink" image, O'Galop gave birth to Bibendum (the Michelin Man), one of the most famous advertising characters in history. Depicted at a banquet table, Bibendum is standing with a raised glass filled with everything that could puncture a tire. On either side of him are two old deflated tires, the one on the left is supposed to be John Dunlop, the one on the right the director of Continental Tires. The proud, inflated and healthy-looking Bibendum is not worried about the sharp objects in his glass, because, as the text reads "the Michelin tire drinks obstacles." This rare and historic poster was the first of hundreds of images using Bibendum all over the world, and as a tribute to the beloved icon's effectiveness, he is still appearing in ads over 100 years later! Maitres 1900 p. 69, Bibendum p. 26ff, Bicycle Posters 38.
Set Alert for Similar Items 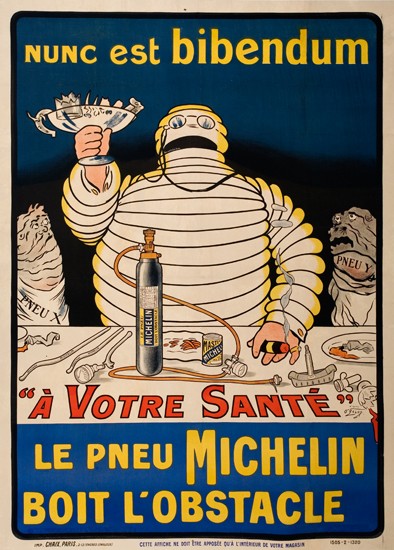