Price Realized: $ 26,000
Price Realized: $ 33,800
?Final Price Realized includes Buyer’s Premium added to Hammer Price
Estimate: $ 8,000 - $ 12,000
WEEKS BEFORE HIS DEATH: APPALLED BY MILITARY'S INTEREFERENCE IN HIS ART SCHIELE, EGON. Autograph Letter Signed, to Chief Engineer Dr. John, in German, reminding him that he sent his painter brother-in-law, Anton Paschka, to show him Paschka's drawings, complaining that he had been ordered to appear a second time within a month before a military inspection board, enclosing the note conveying the order [present], noting that involvement with the military destroys his creative ability, listing his creative obligations and plans, and pleading for his help. 4 1/2 pages, small 4to, written on two folded sheets, personal stationery; horizontal fold. With the original envelope. Vienna, 2 October 1918
Set Alert for Similar Items

"After personally consulting with you, I took the liberty of sending my brother-in-law, the painter Lieutenant Anton Paschka, who wanted to show you some drawings of his--perhaps there is one or another among them that would interest you.
"But the main purpose of my letter is something else, and I believe that you, as an ideal patron of the arts, will pardon me if I do not come to see you about this in person, because in my role as One-Year Volunteer Enlistee Corporal Schiele, Egon, I cannot presume to communicate all of it to you as well as I can write it in my role as artist. Yesterday I received the enclosed blunt note in which I am told to appear for a further inspection. In response I must inform you that I was already presented to an inspection board on September 10, 1918, I, with the entire team at the Army Museum, and I don't see why I should be inspected again after less than one month. . . . There is nothing so depressing as to be extolled as an artist from all sides and entrusted with responsibility and decision-making for what are now the most important artistic issues in Austria, and then, because of other people's mistakes, suddenly to be ordered, as a number, to appear again after only a few weeks before a board whose whims severely inhibit the existence of a creative force . . . so that any new, free, intellectual or artistic conception is wiped out again. The executioner's scaffold comes to mind.
"Understandably, this feeling of being at someone else's mercy weighs on me tremendously, and when such circumstances are prolonged I cannot find delight in art, for which I have every capability; and therefore, for these reasons, I don't want to force myself to produce new works . . . .
"Even the very air of the barracks, with its nasty offices and occupants, appalls me and renders me incapable of doing even the slightest creative work for weeks afterward. Therefore I would gladly forgo all military fees in order not to have to come into contact with such antithetical people.
"I am currently working on assembling the exhibition in Wiesbaden, the artistic content of which is my responsibility and occupies me from morning till evening--at the same time a portrait exhibition in the Secession is also planned, the compilation of which was left up to me. In addition, I am involved in the formation of our new artists' association, for which work has loomed unceasingly for the last nine months and I am primarily striving to initiate and cooperate with the Hagenbund.--Today I had intended to finish a picture that requires a heart, and this notification robbed me of all desire.--Alongside my other obligations: the picture for the Army Museum, 14 portraits that I have agreed to do, the papers for Prof. Hanslick, I am incessantly beseeched to design decorations for the Burgtheater, the Morgen wants to publish a journal and have me on the staff, [and] a series of exhibitions in the Reich and in neutral foreign countries is projected, the irksome little slip strikes me as a nasty irony. . . ."
Published in Roessler's Briefe und Prosa, Vienna, 1921. 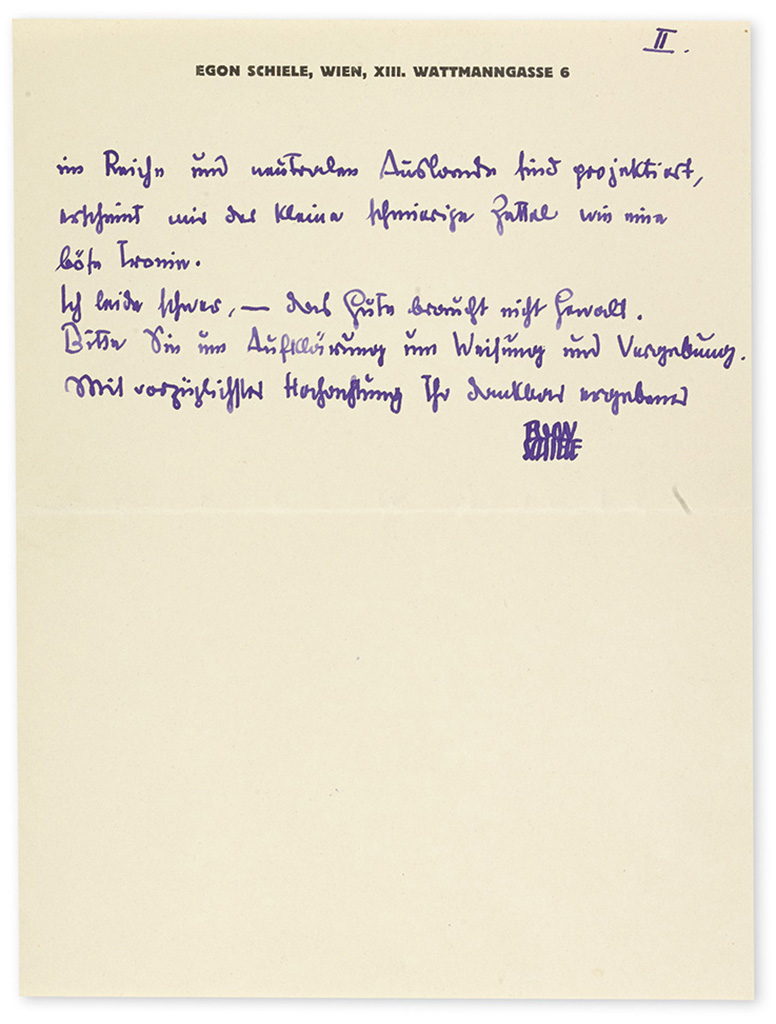 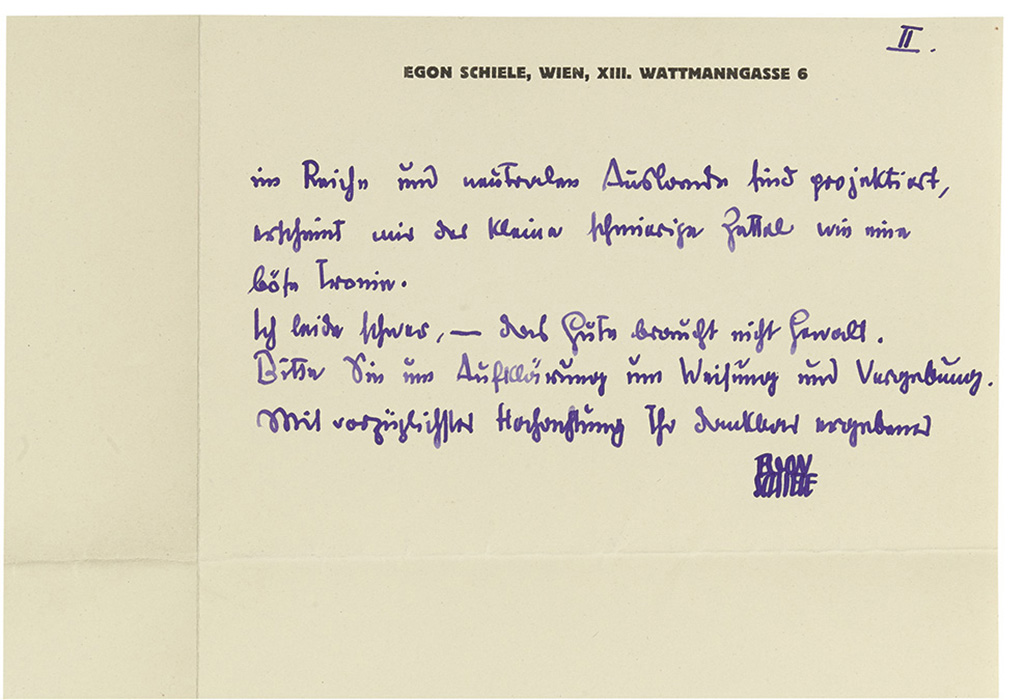