William Glackens (1870-1938) was born in Philadelphia and educated at the prestigious Central High School alongside Ashcan artist John Sloan and famed collector Albert C. Barnes. At age 21 he began working as an artist-reporter and taking classes at the Pennsylvania Academy of Fine Arts; during this time Sloan introduced him to Robert Henri, and the two traveled through Europe from 1895 until 1896 when Glackens moved to New York City. He began working as a magazine illustrator at different publications while simultaneously practicing oil painting at the strong encouragement of Henri.

At this time a group of loosely organized artists was forming in rebellion against the constraints of the traditional artistic establishments, most notably the National Academy of Design's exclusive exhibitions. Known as Eight Independent Painters or The Eight Secessionists, and later just The Eight, the group was led by Henri, the spiritual leader of American Realism at the time and a lifetime crusader against the artistic establishment, along with four other Philadelphians with illustration backgrounds-Glackens, Sloan, George Luks, and Everett Shinn, who had been acquainted through their Philadelphia newspaper work. The circle was rounded out by the older and more established Impressionists and Post-Impressionists, Ernest Lawson and Maurice Prendergast and the fanciful Arthur B. Davies. Despite their varied styles, backgrounds and ages (Shinn was the youngest at 32 and Prendergast the oldest at 55), the men were united against the Academy's iron-fisted control over what was then heralded as "fine art" in America. Their association culminated in an independent group show at the Macbeth Galleries in 1908.

After the Macbeth show, Glackens maintained his presence at the forefront of the shifting art world. He was instrumental in the planning and execution of the famed 1913 Armory Show, of which the Macbeth show was in many ways a harbinger. He was also responsible for building the bulk of the Barnes collection; Barnes sent him on several buying trips to Paris where he acquired important works by such luminaries as Cézanne, Picasso, Van Gogh, and Renoir. His impressive connoisseurship and vision helped shape some of the most important exhibitions and collections of Modern Art in the world.

Glackens's painting style began to shift away from the muted, Ashcan-inspired palette of his earlier works to a more Impressionistic embrace of light and color around 1910, surely emblematic of his keen observation of the works of Cézanne and Renoir. He was less interested in politics than his Ashcan comrades, and while he frequently chose to paint the people around him, his works lacked the grittiness and social realism of those by painters like Sloan. He focused less on city life and began painting leisure scenes, landscapes and portraits of his close friends and family.

One motif that Glackens chose to depict sporadically from the 1890s-1930s was the beach and its activities. One of his most extensive forays into this motif was a series of impressive canvases he completed while he vacationed with his family around Bellport, Long Island between 1911 and 1916. The Beach, Isle Adam depicts bathers on a popular beach outside of Paris, on the Oise River, where Glackens and his family lived during the summers of 1926-28. It is the artist's most significant work from the mid-1920s that portrays his celebrated beachgoers and the first instance since 1906 that Glackens painted a beach scene of Europe. The rich, brilliantly-lit colors, short brushstrokes, liveliness and motion that beautifully define the canvas showcase Glackens' distinctly American vein of Impressionism.
Set Alert for Similar Items 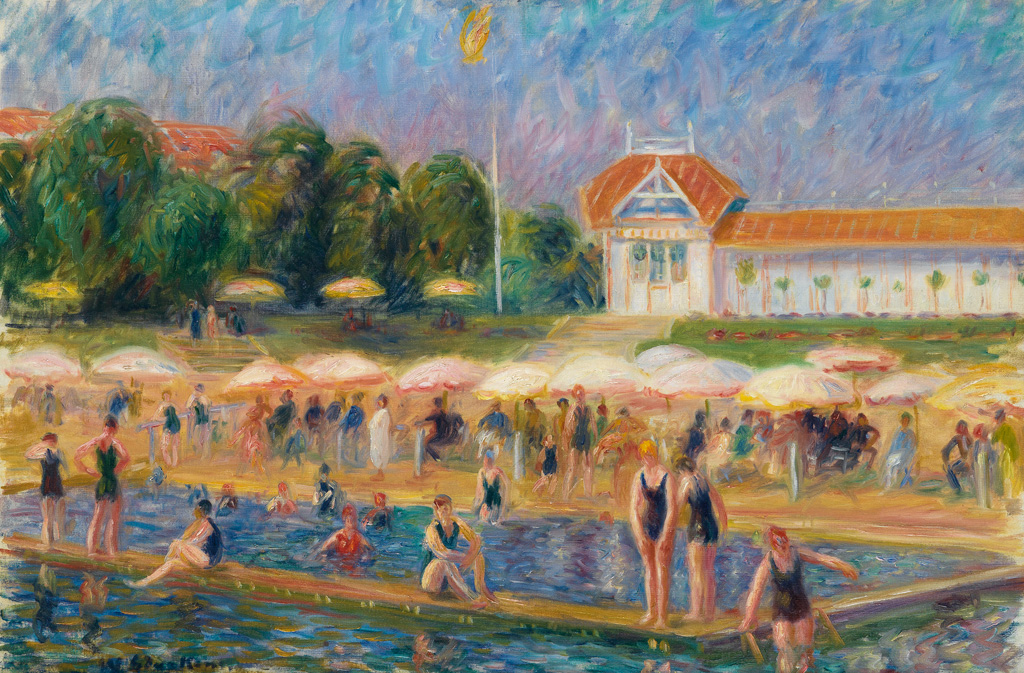